Another tribute video today. Earlier this afternoon, Austrian 'Fearless' Felix Baumgartner did the impossible and made the highest freefall jump in history right from the edge of space.

Well, the singer is Hiroshi Madoka（円広志）who was raised in Osaka. He made his debut as a singer at the Yamaha Music Festival in 1978 with "Musoubana"(written and composed by Madoka) where he won the Grand Prize. From that point, the song was released as a single in November of that year and would eventually sell 800,000 records. It went up as high as No. 4 on the Oricon rankings and would become the 23rd-ranking single in 1979. Although Madoka would continue releasing singles for many more years, his debut would be his only bona fide hit. Apparently, he was able to write the song in 5 minutes....a little less than what the song is clocked at!

I think that lyric alone is inspirational enough. Certainly a lot of commercial campaigns have thought so as well since the song has been used over the years by various products for their advertising. If you're feeling somewhat down, give this tune a listen. Strangely enough though, Madoka wasn't inspired to use the "Tonde" verse because he had this need to fly. Instead, he just got inspired by the name of his entertainment agency that he had belonged to, Office Tonde.

In any case, watch Fearless Felix make his supersonic jump!
Posted by J-Canuck at 11:48 PM 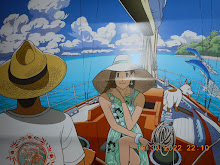