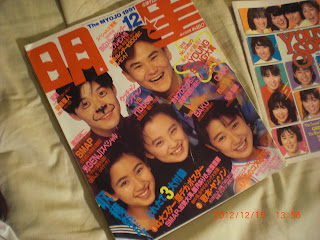 Ah, yes. Those old magazines. To be honest, I don't know exactly remember where and how I got each individual one, although generally speaking, they've come from purchases in Japan and in Toronto's Chinatown, and perhaps I inherited a few of them from one of my fellow J-Pop enthusiasts back a quarter-century ago. 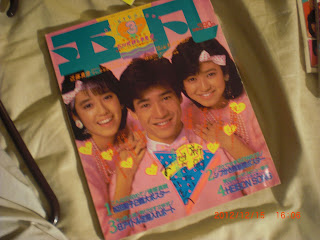 This is the oldest magazine (March 1984) that I have here since the cover does feature Yu Hayami, Hidemi Ishikawa and Masahiko Kondo（早見優・石川秀美・近藤真彦）. The covers were always famous for that pose of all of the currently popular aidoru or even tarento gleaming their teeth at the camera. Basically, Myojo (Morning Star) and Heibon (Commonplace) were the popular Japanese equivalents of America's teen idol magazines such as "Teen Beat". Not sure about the lifetime of Heibon since it finished its run several years ago, but Myojo is still continuing and has been since 1952. Back in the 80s, the price of a single issue of Myojo was about 300 to 400 yen....not too bad at all for a rather thick magazine, but getting them in Toronto was easily 4-5 times more expensive. Still, I did indulge in my little habit of running down to Chinatown. 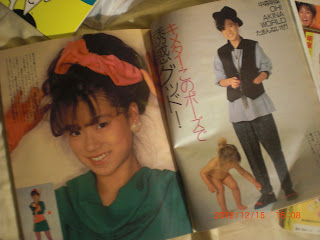 Inside an average monthly, there were the beginning glossy front pages with the top aidoru posing in the coolest fashion of the day. Sometimes, the situations were like the one for Akina Nakamori（中森明菜） up here just straight posing for the camera. Sometimes, the singers would find themselves in a domestic situation, trying to cook up an omelette or something. But no matter what, most of the pictures had to be happy-happy! 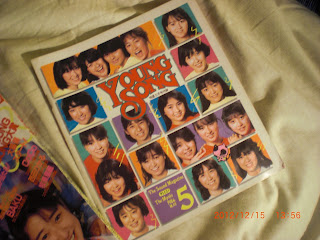 Of course, at the time, my ability to read Japanese was restricted to hiragana, katakana and an odd sprinkling of kanji, so full articles were simply out of my purview. Not to say that I can now race through "The Daily Yomiuri", but I think I can handle a Myojo article OK now. But going back to those early days, I used to look at the pictures in the main book but enjoy looking at the "Young Song" booklets that came sandwiched in each issue of Myojo. This is the May 1986 issue with the Onyanko Club members festooned on the cover.

"Young Song"had all the popular songs of the month, along with the lyrics, and in some cases, included even the score.....great for all those kids with pianos or organs....which would probably mean 95% of the population. Often a certain singer would be highlighted or a certain theme such as songs for evening listening would be featured. In those days, I would rely on these booklets way before YouTube came along.

It's always nice to go through these magazines once in a while just to see how things were back then and how young these folks all were way back when.