I've mentioned this Group Sounds band by the name of Purple Shadows before when I wrote about "Wakarete mo Suki na Hito"（別れても好きな人）, an original song by them that hadn't gotten anywhere on the charts but would become a Mood Kayo classic about a decade later with Los Indios & Silva.

According to the J-Wiki article on Purple Shadows, the group made their debut in 1968 when the Group Sounds boom was already showing some signs of decline (I think its last gasps were heard around 1970). However, it seems as if Purple Shadows had decided to not go the usual jangly and sometimes psychedelic sound that was part and parcel of the genre but went for a bit more Mood Kayo with their instruments. In fact, one of their specialties was in the Hawaiian end of MK.

The band hit pay dirt with their debut single "Chiisana Sunakku" (A Small Snack Bar) when it was released in March 1968, It may have been the familiar GS guitars but the finished product was definitely more for the interior of an old Japanese pub than the sands of a beach. Written by Mieko Maki（牧ミエコ）and composed by one of the guitarists of Purple Shadows, Hisashi Imai（今井久）, "Chiisana Sunakku" was all about the reminiscences of a fateful romantic encounter at the titular watering hole.


I enjoyed listening to the guitar harmonies and the way Imai and his bandmates sang the title with a bit of a flip on the last syllable. It rather gave a nice slice of whimsy to the song. "Chiisana Sunakku" peaked at No. 2 on Oricon and sold a little under half a million records. It also ended up as the 14th-ranked sing of the year.

Rather ironic to say, having lived in a nation with a thriving bar culture but I was never much of a drinker although I did go to a fair number of teacher-student drinking sessions. However, our usual hangouts were the izakaya such as Tengu and Nihonbashi-tei which were the larger pubs. So it was pretty rare for me to head into the sunakku which is a shortened name for "snack bars", so named since they were establishments that also provided little snacks to down with the alcohol such as peanuts or edamame. The one place that I do remember was in up in Minakami, Gunma Prefecture which was this very tiny bar with a rich reddish-brown decor. The teachers and I drank ourselves silly so that we ended up spending the night there...luckily it was the weekend. Perhaps it was that experience that ensured I wouldn't be drinking all that much for the rest of my life. 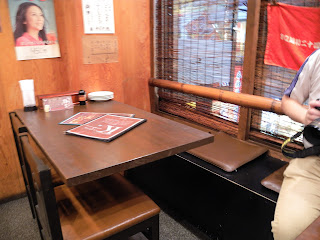