As to how I found "Sayonara Yokohama" by Yujiro Ishihara (石原裕次郎) that I didn't even know existed: I was bored.

Sundays tend to be a lazy day for me and half of me is willing to just kick back, relax and vegetate and let my brain temporarily become a piece of tofu. The other half of me, on the other hand, adamantly refuses to let the last day of the weekend go to waste and insists I get up off my seat and do something. Anything. This often puts me in the uncomfortable position of being caught between being bored because I'm not being productive and wanting to do something but being too lazy to do whatever it is. This Sunday in particular, I couldn't stand floating in that annoying limbo any longer and so I decided to go with doing something that satisfies the contradicting desires, and that was to listen to some enka.

I was in the mood for all things Hiroshi Itsuki (五木ひろし), which had me revisiting a few familiar tunes as well as a couple which I normally overlook. A number of songs in and with my boredom somewhat quelled, I noticed Tough Guy's "Sayonara Yokohama" in the suggestion column, and since it piqued my interest I put my exploration of Itsuki-songs on hold and went ahead to check it out.

It turned out to be another soothing, jazzy Mood Kayo number, and for some random YouTube pick, it was way better than what I expected. And I must say that Yujiro's usual boozy delivery feels more pained and forlorn in this one. From Rei Nakanishi's (なかにし礼) lyrics, I'm guessing that the fellow is setting off to foreign soil via a boat from Yokohama and so he's bidding both his lover and the city he loves an emotional farewell. Composing the music was Shiro Yuzuriha (ユズリハ・シロー).

"Sayonara Yokohama" was released in July 1971 and was apparently one of Ishihara's more successful singles, selling about 550 000 copies. 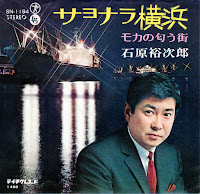 To round off the article, I'd like to briefly highlight another find. Soon after "Sayonara Yokohama", I picked Itsuki's "Aishitsuzukeru Bolero" (愛しつづけるボレロ). Next best decision of the day. Seeing the man suavely tapping on the piano while singing the upbeat, tango-esque tune had the jaw dropping and the heart flying out of the chest.