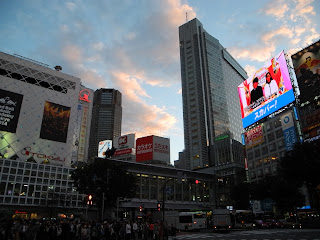 Early in the lifetime of "Kayo Kyoku Plus", I wrote about the quirky "Jenny wa Gokigen Naname"（ジェニーはご機嫌ななめ）originally performed by the band Juicy Fruits and then covered by a number of artists, notably a duo called hi-posi（ハイポジ）. In the article, I also mentioned that my first encounter with hi-posi was through this slightly avant-garde video that I saw one night on TV. Vocalist Miho Moribayashi（もりばやしみほ）definitely made an impression on me...looks and voice.


Well, I didn't know the title of the song back then but I finally found the video on YouTube. The title is "Shintai to Uta dake no Kankei" (A Relationship of Just Body and Song) which was their 2nd single from 1995. And yep, all that out-of-focus fuzziness, sometimes herky-jerky camera work and closeups of Moribayashi's face are back to enhance that dreamy nature of the song and its video. I think hi-posi must have represented the cool beatnik corner of Shibuya-kei especially with the singer's whispery voice. Her feathery vocals remind me of the voice of CHARA if that singer had decided to adorn herself in the atmosphere of beads and lava lamps.

Moribayashi (partnered with guitarist Kenji Kondo/近藤研二) came up with both words and music for "Shintai to Uta dake no Kankei" as she sensually encourages the listener to develop that relationship between body and music together. The lyrics are pretty vague but I think they pretty much come down to "making beautiful music together". No complaints here. A mini-album and a full album with the same title as the single were released in 1994 and 1995 respectively with the band's own translation of the title, "BODY meets SING".