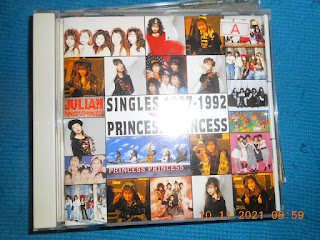 Happy Sunday, folks! This may be the one and only instance in which I have a KKP article that I've categorized as a BEST but have also thrown in the Album label as well. That's because although indeed Princess Princess'（プリンセスプリンセス）"SINGLES 1987-1992" has a lot of their big hits, the band itself has maintained that it would never release a BEST album for their own reasons. So on J-Wiki, it's a BEST album but on Wikipedia, it's known as a compilation album. As such, I'll be peacemaker here and throw in both labels. Incidentally, there is a BEST album, "The Greatest Princess", which was released in February 1996, but this wasn't a case of the members finally acquiescing; those tracks were selected by the folks at Sony Records and no one in the band had any input there.

Well, as you can see up above, most of their hits have been talked about on the blog but let's see what I haven't covered yet. The first track is actually something special made for this BEST album, "THE PRIVATE FANFARE" which is an orchestral piece created by vocalist and songwriter Kaori Okui（奥居香）, and it's done as a overture as if it were supposed to be adorning some epic flick's soundtrack. There's even a jazzy segment included. It goes to show that Okui wasn't just about the rock and according to her own J-Wiki article, she has provided music for at least one motion picture and one TV drama.

Following "THE PRIVATE FANFARE", it takes me until Track 8 of "SINGLES 1987-1992" before I can start talking about something new, and that is "GO AWAY BOY" which happens to be Princess Princess' 5th single from May 1988. One of their early pre-"Diamonds" releases, this was written and composed by band guitarist Kanako Nakayama（中山加奈子）, and it's a searing rejection by a woman against a now-former lover, although the hint within the lyrics is that she's hiding some massive heartbreak underneath all of the fury. With Okui's vocals and everything else in the arrangement, yup, this is the Princess Princess sound. The single peaked at No. 19 on Oricon and was a part of the band's 2nd album "Here We Are" from February of that year, placing in at No. 8. 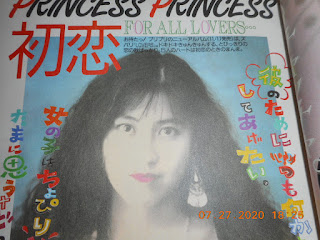 "GET CRAZY!" is a fun-time romp which was Princess Princess' 6th single from October 1988. This time with Nakayama and Okui working on words and music respectively, the song sounds like a good ol' honky-tonk rocker about all of the trials and tribulations of love which is still all worth the while. "GET CRAZY!" got as crazy as No. 13, and it was included on the band's 3rd album "LET'S GET CRAZY" which was released in November that same year which hit No. 2.

Meanwhile, "My Will" was the band's 3rd single from November 1987 which seems to have a bit more pop in there than in the previous two tracks. I'd say that with those synths being used, it almost sounds a bit more New Wave even. Keyboardist Tomoko Konno（今野登茂子）provided the lyrics alongside Okui's melody about being someone having the spunk to take on the whole world. As with "GO AWAY BOY", "My Will" was also a track on "Here We Are" but a 1992 mix of the song is on "SINGLES".

I think that this is one single that perhaps I should have done as its own article but unfortunately I did forget, and it's one that comes later in February 1992, "Jungle Princess". Their 13th single by lyricist Konno and composer Nakayama, the lyrics describe housewives getting increasingly frustrated by their husbands being dragged further and further into work until something finally explodes, and I guess that the music video shows the aftermath with the band deciding to head out to the wilds of Las Vegas for some self-pampering. Fortified with a battery of horns and percussion, I can't help but get reminded of songs like Baltimora's "Tarzan Boy" and those "boom-laka-laka-laka" calls probably come from Sly and the Family Stone's "I Want to Take You Higher” from 1969. Strangely enough, their 13th single actually peaked at No. 13. 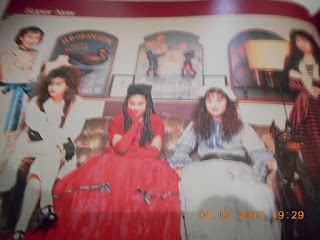 With a beefy drum-and-bass intro, I thought that I was going to hear Madonna's "Material Girl" when my ears first came across "Pilot ni Naritakute" (Wanna Become A Pilot), the band's 14th single from May 1992. Like "Jungle Princess", this was another Konno and Nakayama collaboration but this time, their songwriting roles were reversed. I think that a lot of Princess Princess' songs were meant as loud encouragement to listeners, and "Pilot ni Naritakute" is one example of Okui and company exhorting folks not to let the obstacles permanently bar them from their goals. This one hit No. 6.

As with the first track, the final track on "SINGLES" is actually a song created for this album, "Hareta Hi ni" (On A Fine Day). A pure pop song through and through, Okui provided the sunny music with drummer Kyoko Tomita（富田京子）writing the bittersweet lyrics of correspondence of someone saying goodbye to a dear person. The writer feels that they cannot reciprocate the love that the receiver needs but they also feel that they cannot return to just being friends...so, adios! Ouch!

"SINGLES 1987-1992" was Princess Princess' 3rd million-seller and it stayed at No. 1 for five weeks straight. J-Wiki also notes in its article that up to the release of "SINGLES", it had been extremely rare for a BEST album to become a massive hit that this one became (although I think Kazumasa Oda's "Oh! Yeah!" is one candidate and of course, B'z opened the floodgates with its BEST). One reason for the huge success was that hit singles such as "Diamonds" and "Oh Yeah!" hadn't gotten onto a Princess Princess original album before that point, so I think that even casual fans couldn't ignore this release. By the end of 1992, "SINGLES" was the 8th-ranked album of the year. 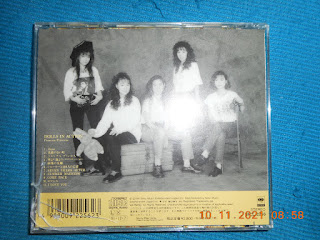 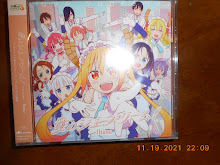