I was born in the mid-1960s and some of my earliest sense memories involved music. On the Japanese side, it was all enka as I have mentioned in a few of my entries over the past year. But on the Western side, I heard a lot of standards via a collection of 5 records that came with the huge RCA Victor stereo. It included a lot of the music that would later be called Lounge in the 90s; stuff by Hugo Winterhalter and Peter Nero. And there were the popular pop acts of the time like Nancy Sinatra and The Fifth Dimension. Plus there were all of the sitcom theme songs that I'd absorbed by osmosis from "Bewitched", "Family Affair", "The Brady Bunch", etc. When I heard Shibuya-kei for the first time, my memories of those early days rushed back.

The Wikipedia entry for Shibuya-kei states that this genre of Japanese pop music is a mix of electropop, French ye-ye music, jazz, bossa nova, lounge, etc., although when I have been in the actual Shibuya, the Teen Mecca of Japan, I got the impression it was more of a grunge rock area. In any case, a number of different musicians have been associated with Shibuya-kei, but if I were doing a word association exercise with a medical professional and he/she said "Shibuya-kei", I would automatically respond with Pizzicato Five.

Now, Shibuya-kei didn't start with Pizzicato Five. I distinctly remember the duo Flipper's Guitar, a group in the genre, when I was in Gunma-ken and that was 1989-1991. However, the arrival of P5's third lead vocalist, Maki Nomiya（野宮真貴）in 1990 catalyzed the look and style along with the music through her flamboyant  60s-reminiscent fashion sense. And from that point forward, P5 was Maki Nomiya and Yasuharu Konishi（小西康陽）.

I'm always going to associate Pizzicato Five with two songs, "Baby Portable Rock"(1996) and this one, "Tokyo wa Yoru no Shichi-ji"(7pm in Tokyo....although it's better known in English as "The Night is Still Young"). Released in December 1993 as their 6th overall single and their second with Nomiya, the duo's declaration of the title at the start of the song sounded like a clarion call that there was a new P5 in town and Tokyo had better get ready. The overall song also had that feeling of the beginning of the duo's new phase....the constant busy melody with the percolating synths and percussion while Nomiya's vocals lightly danced over the hustle and bustle....it didn't seem to quite end. It was almost like the prelude to the next song. And of course, there was the smooth announcer stating "A New Stereophonic Sound Spectacular" as if he were selling my family's 1960s stereo.

The song itself only made it as high as No. 50 on Oricon, but along with Flipper's Guitar and Kahimi Karie, Pizzicato Five in the 90s helped kick off the new sound spectacular of Shibuya-kei into the next century. 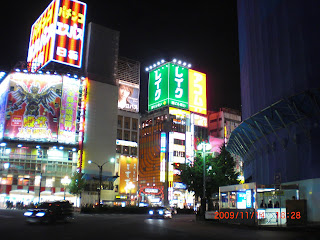