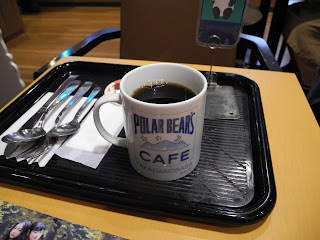 It's been several months since one of the many ending themes for my beloved "Shirokuma Cafe"（しろくまカフェ）has been put up as an article on the blog. I actually decided to re-watch the first episode of the 2012-2013 series again last night, and as such, I did another quick look for another ending theme that had yet to be covered.

Well, it didn't take too long since the character appeared right in Episode 1. Jougin Panda（常勤パンダ...Full-Time Panda）popped up as Panda-kun's calm and wise zoo mate when the latter began his first part-time job, although even he had to take pause at some of his kohai's remarks. He sounded oh-so-mellow and yet he remained an absolute professional at his job (his mantra: Service, Service) before his transfer to Singapore late in the series (the one tearjerker episode in a show that was almost always light and happy).


Couldn't find the ending credits for Jougin Panda's turn at the microphone. His voice, by the way, was provided by seiyuu Katsuyuki Konishi（小西克幸）, who's currently voicing one of the supporting characters on "En En no Shouboutai"（炎炎ノ消防隊）. But although I couldn't find those credits with Jougin playing all the instruments, I did find the full version of his song which he sang for the July 2012 episodes (and for Episode 44, the sad episode, as a tribute to the character), "ZOOtto, ne" (A Zoo is...). The title could also be a pun on "zutto, ne"（ずっとね）meaning "always".

Written and composed by Saki（紗希）, who took care of all of the other ending themes, I'm only half-joking when I say that Konishi/Jougin could have been welcomed warmly at the Grand Ole Opry with his contribution to the "Shirokuma Cafe" musical tapestry. "ZOOtto, ne" is the pleasant and melodic equivalent of a drive through bluegrass country. Saki has come up with pop, enka, show tune and Latin. Why not country music as well? And as the lyrics go, Jougin seems to be the most inviting of the characters. Come for the cute pandas, stay for the congenial conversation.

Glad to hear that Shirokuma Cafe...the real cafe in Takadanobaba in Tokyo...is still around. Wouldn't mind another visit there for lunch or dinner when I drop by the megalopolis next time.
Posted by J-Canuck at 2:00 PM