As nikala wrote in her article about Rajie's 4th album, "Mahiru no Hodou"（真昼の舗道）, there isn't a whole lot of information on this singer although my fellow collaborator put a goodly amount of it in the first paragraph. She also mentioned about her 3rd album "Quatre" (1979) which was an example of techno kayo.

Well, just by chance, I came across one of the tracks from that album, "Watashi wa Suteki" (I'm Wonderful) last night. It's a pretty quirky track created by Ryuichi Sakamoto and Akiko Yano（坂本龍一・矢野顕子）that combines some light technopop with some Bee Gees, and the fact that Rajie is singing in an even higher register (along with the Sakamoto connection) had me thinking of Taeko Ohnuki（大貫妙子）. Yano's lyrics have the protagonist swooning about how splendid the morning is and how wonderful it is to be her....sounds somewhat Kardashian. But I gather that at the time when this was released, the rising wealth of the country getting reflected in the big city was sparking some big-time urban narcissism via the restaurants and discos.

One more tidbit of trivia from Rajie's J-Wiki article....this time, on the derivation of her stage name. Apparently, the then-Atsuko Souma（相馬淳子）got it from a character from the 1966 film, "Maya". 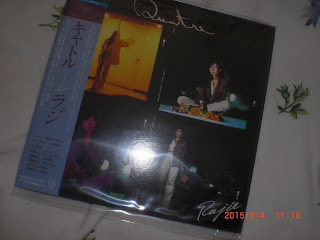