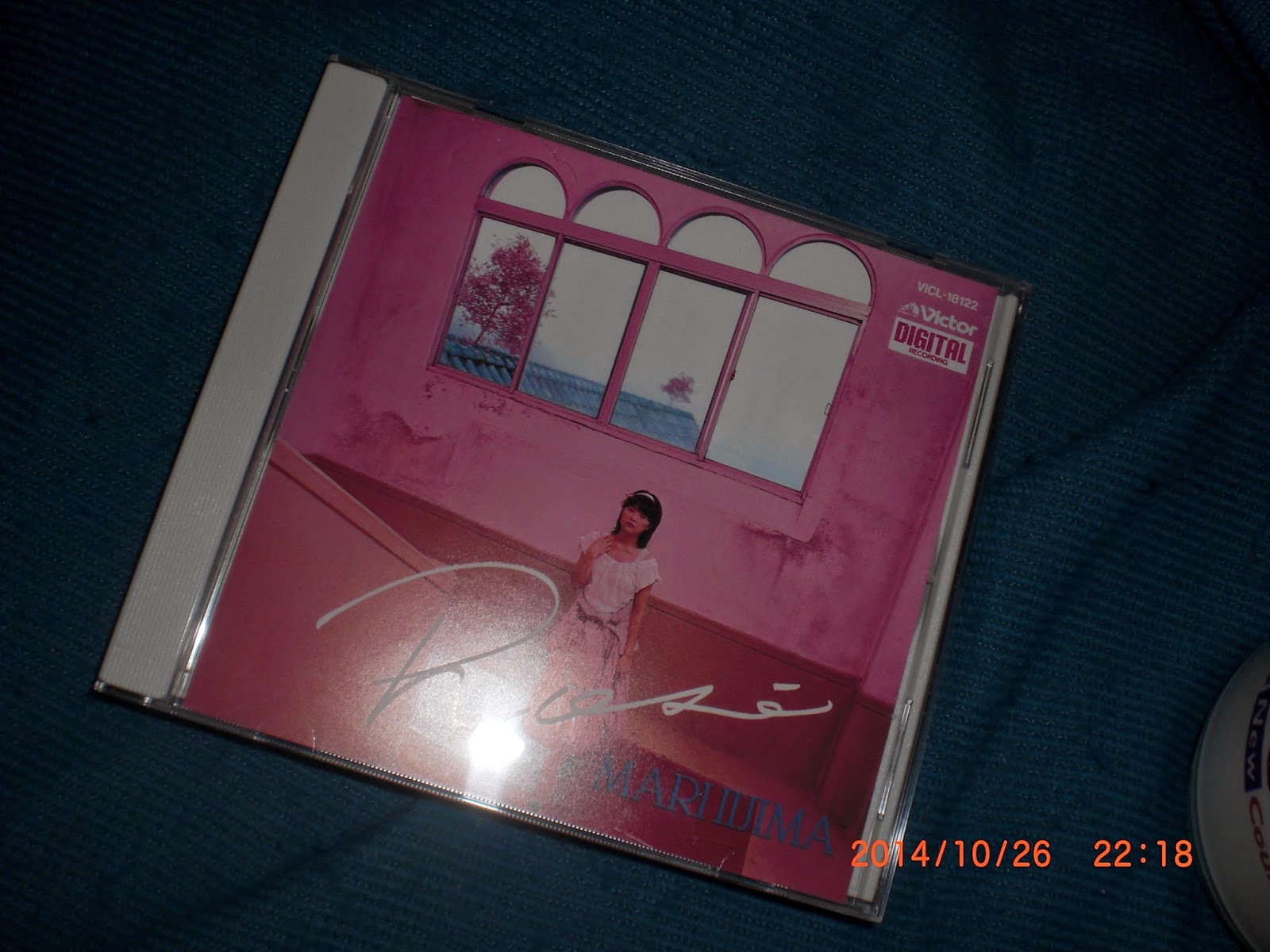 One of my other targets for purchase in Tokyo was a Mari Iijima（飯島真理）album and based on nikala's article on "Beautiful Music", I ended up getting her 1990 release, "It's a Love Thing". Then, I was fortunate enough to have been given a present in the form of Iijima's debut album from September 1983, "Rosé". It's an album that I have seen tons of times while leafing through "Japanese City Pop" to which I've often remarked, "Man, that is one PINK room!".

A little more seriously, I read that Ryuichi Sakamoto（坂本龍一）was behind the production and that Iijima herself wrote and composed all of the 11 tracks. Then, when I finally got to open my own copy of "Rosé", I found out that Sakamoto was on the keyboards, and there were a number of recognized session musicians such as Tsugutoshi Goto (後藤次利...bassist), Tatsuo Hayashi (林立夫...drums) and Masamichi Sugi (杉真理...backup vocals). For a first album from a then-20-year-old with just one single under her belt (albeit along with a voice acting performance of one of the most famous anime characters in history), that is a pretty loaded lineup.


First off, I gotta say that Mari Iijima IS Lynn Minmay and vice versa, as Movie Trailer Voiceover Man would often bellow. So, being the geek that I have been, there was an added thrill to listening to her through her own creations as interpreted by Sakamoto via the genres I have listed at the bottom of the article. As someone who, up to the point that I popped the CD into my computer, had known Iijima largely through Minmay in the "Macross" series, I was looking forward to hearing her own material from the very beginning.

"Rosé" begins with the bouncy "Blueberry Jam". Although I said Iijima was behind both lyrics and music, Sakamoto's early 80s influence is unmistakable from the opening notes (and throughout the album). I thought I had jumped into a Taeko Ohnuki（大貫妙子）or Akiko Yano（矢野顕子）tune from that same time period. Both the album opener and the second track, "Marin"（まりん）below have that bubbly aidoru beat along with the lyrics to match ("Blueberry Jam" is about getting giddy about giving that jar of the titular spread to someone special while "Marin" seems to be referring to cute little Mari herself). However, there is also that quirky technopoppy element that brings some more sparkle to the proceedings. I like the fact that both Sakamoto and Iijima incorporated a trumpet solo and a piece of acapella to the first song. And "Marin" has the singer in Minmay mode but on a song that sounds a cut above.

"Secret Time" is another interesting one in that it is a soaring love serenade with that enhanced Sakamoto touch, but it's definitely Iijima's own song rather than something that the aforementioned Ohnuki or Yano would tackle. The delivery and music both sound like something that a teen girl in love would be feeling. And yet, Iijima throws in her own jazzy riff on the piano followed by an exotically musical carpet ride as if that soaring flight was over continents merely than just a jaunt over the neighbourhood. Finally, it all finishes off with Kenji Omura's（大村憲司）thrilling electric guitar.

"Kitto Ieru"（きっと言える...Tell You Straight） is Iijima's 2nd single from November 1983. It's a bittersweet ballad of having the guts to say goodbye to the boyfriend once it's discovered that he may have more intense feelings for another. I could hear Minmay in there as well but there is also a layer of steel behind the delivery, the question being whether that layer comes from the anger of betrayal or the heartbroken courage needed to break things off. The music, though, still ranges from upbeat to downright giddy.

The one truly City Pop-esque track is "Himitsu no Tobira"（ひみつの扉）that launches with a blast of horns and jangly guitar. This was the B-side to "Kitto Ieru", and in terms of lyrics, "Himitsu no Tobira" seems to literally be the flip side to the A-side song in which Iijima sings about trying to get through to that guy who has frozen her out for some reason.

Another track from the album is "Love Sick" which nikala explains about in one of her articles.

I enjoyed "Rosé" a lot and as nikala mentioned, it has generated a lot of talk among the City Pop and techno kayo fans. In a way, I think the album resembles Antoine de Saint-Exupéry's "Le Petit Prince" in that I will hear different things as I continue to listen to the album over and over again. I've already listened to it twice in the past couple of days, and different tracks have popped up in prominence each of those times for different reasons. Not surprisingly, I can bet that at least a few more of the tracks that I didn't cover this time will get their own articles in the near future. Of course, I will have to cover "It's a Love Thing" as well.
Posted by J-Canuck at 8:32 PM