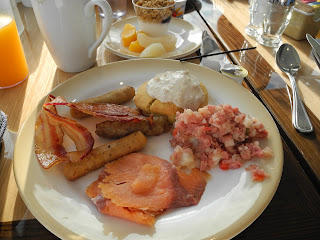 Early on last decade, shortly after returning from Japan for good, my family doctor informed me that I should be laying off the bacon. You can imagine how accepting of that advice I was. Not very. I will always be an omnivore and happily devour the famous breakfast meat.😈

The reason that I'm even starting this article with one of my foodie loves is that I encountered this jazz musician and his band which has been dubbed Bacon Egg. The Japanese love to say this gastronomical combination made in heaven as "Bacon Egg" and not "bacon and eggs". Anyways, the leader of this group is jazz saxophonist Genji Sawai（沢井原兒）who has worked in session with singers such as Masayuki Suzuki（鈴木雅之）, Eikichi Yazawa（矢沢永吉）, REBECCA, and Miki Imai（今井美樹）, etc.

Sawai released this 1981 album with Bacon Egg called "Skipjack" and I'm not really sure whether the album was named after one of the species of tuna out there. Still Sawai's title track which launches the LP seems to follow the titular fish with its speed and energy. It's funky and jazzy as any fusion song ought to be and possesses that fun feeling of striding through downtown New York or Los Angeles. As well, I get reminded of what I wrote about a few days ago through Teruo Nakamura（中村照夫）and Rising Sun Band's "Mr. & Mrs. Funk".

A couple of days ago, I also whipped up an article about veteran saxophonist Sadao Watanabe（渡辺貞夫）for his 1993 "Till We Meet Again", and I found out that Sawai studied under Watanabe when he first started his career in 1973. Couldn't find out much otherwise on the musician aside from what I've read on a Japanese website called "The Sax Online". Sawai was a big fan of John Coltrane which got him onto the saxophone and his time with Watanabe lasted for a year during his days in university after which he participated in several bands and other units. In 2016, he released another solo album, "Tokyo Kaihouku"（TOKYO解放区...Tokyo Free Zone）.

To finish off, let me say that having those traditional Sunday morning strips wasn't the only form of bacon that I had eaten during my 17 years in Ichikawa. From time to time, when I hit a patisserie such as Vie de France in Tokyo, I also bought something called a Bacon Epi. And yep, it absolutely was epi(c)!

Email ThisBlogThis!Share to TwitterShare to FacebookShare to Pinterest
Labels: 1981, Genji Sawai, J-R and B, Jazz, Single