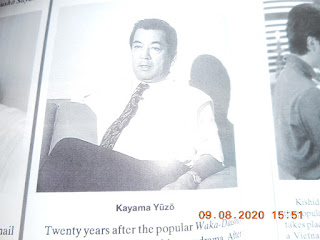 Another Tuesday night, another round of "Uta Con"（うたコン）. Tonight was pretty special, though, because half of the episode was devoted to singer/actor Yuzo Kayama（加山雄三）, the Wakadaisho（若大将）himself. What I hadn't known was that last fall, Kayama had suffered a cerebral hemorrhage which led to a mild form of paralysis on his left side and affected his speaking to a small extent. However, he laid his fans' worries to rest by making an appearance on tonight's show and although he did display some lisping in his voice, he was basically the same old Kayama: cheerful and courteous. Plus, he even performed one song on stage to join a lot of his taped performances. The Wakadaisho is still a trouper.

Some of the other guests covered some of Kayama's hits over the years, including enka singer Yukino Ichikawa（市川由紀乃）. She performed his 4th single from June 1965, "Koi wa Akai Bara" (Love is a Red Rose). Written by Tokiko Iwatani（岩谷時子）and composed by the singer under his songwriting pseudonym of Kosaku Dan（弾厚作）, there is some similarity between "Koi wa Akai Bara" and one of his most famous hits, "Kimi to Itsumademo"（君といつまでも）which wouldn't be released until December that same year. I guess then that this particular song is a prototype of sorts for "Kimi to Itsumademo", especially since Iwatani and Kayama were also responsible for that one.

What makes "Koi wa Akai Bara" stand out is Kayama's first lines which are in perfect English: "I love you. Yes I do", and I did hear that he is pretty fluent in the language. Plus, although I did note above the similarity between it and "Kimi to Itsumademo", I couldn't help but pick up on the especially wistful arrangement of "Koi wa Akai Bara" that reminded me of the love balladry of the 1960s in the United States as performed by singers such as Connie Francis. The Wakadaisho probably had those teenaged bobbysoxers in Japan swooning like crazy.

Last weekend, I posted my first article on singer/actor Keiichiro Akagi（赤木圭一郎）where I mentioned about the nicknames for some of the big young stars of the time. Akagi was known as The Cool Guy, Yujiro Ishihara（石原裕次郎）was The Tough Guy and Akira Kobayashi（小林旭）was The Might Guy. Knowing that Kayama already had his eternal name of The Wakadaisho, I still want to place my own nickname for him since he's had that impressive presence (always looks good in a tux) and affability in the movies and on stage. He would be The Suave Guy. I'm hoping that he will continue to recover over the next number of months.