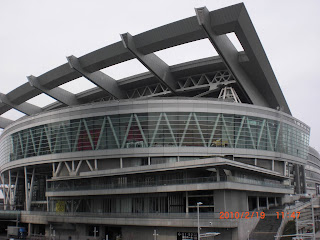 The two prefectures that I lived in during my Japan odyssey were Gunma and Chiba, and they were very different experiences indeed, the former being out in the countryside while the latter was a bedroom town. Of course, I worked in Tokyo, Chiba and occasionally went even as far out to Yokohama. But Saitama Prefecture wasn't a frequent target for visits. Another prefecture adjoining Tokyo, I did go out there once to attend a regional JET conference in the city of Kawagoe in 1989 and then many years later, I was keenly interested in visiting the world's only John Lennon Museum right at Saitama Super Arena in what is now the city of Saitama; the above photo is of the arena itself.

For those who lived in the Kanto region, there was the joke of why even visit or live in Saitama. Well, personally speaking, I have had nothing against the prefecture and I could have easily ended up residing there if it hadn't been for my friend recommending that I take over his apartment in Ichikawa, Chiba. The southern part of the prefecture has also served as a bedroom community for people working away in Tokyo and it has all of the conveniences of suburban living.

However, I gather that the question has perhaps remained. I was reminded of this when I was watching the NHK kayo broadcast on TV Japan last weekend and the guest singers sang "Naze ka Saitama" (Saitama for Some Reason). Heck, the title gives the equivalent of a "Kick Me" sign to the province.

Originally, the song was created by a fellow whose given name I have no idea in pronouncing accurately but I will give it the college try. The lyricist and composer for "Naze ka Saitama" is perhaps Nenshu or Ayubune Akikawa（秋川鮎舟）with that first name meaning "smelt boat", and considering that the project was meant to be a comical song for the comical kayo singer Manzo Saita（さいたまんぞう）whose other song that I've contributed to "Kayo Kyoku Plus" is "Tokyo Country Night"（東京カントリーナイト）created by Beethoven Suzuki（ベートーベン鈴木）, perhaps Akikawa's moniker was also meant to be somewhat tongue-in-cheek.

"Naze ka Saitama" was the debut single for Saita, and it was indeed the perfect song for this comedian whose first few syllables of his name when read in the original Japanese manner actually reads out as Saitama (his real name, by the way, is Kimio Gobo/牛房公夫). At the time, Akikawa had been writing songs for Vega Music, a company which produced regional songs for Gunma and Tochigi Prefectures, and when Saita, who was acquainted with the president of Vega, popped on by, the songwriter felt that he found the perfect person to take care of this song about Saitama (not sure if it was just that aforementioned similarity between the singer's name and the prefecture's name).

"Naze ka Saitama" has been treated as an enka in its J-Wiki article but I think that Latin guitar arrangement and Saita's somewhat mournful delivery makes it more of a Mood Kayo. When it was first released in 1980, there were only 100 copies that got onto the market. However, when Saita tried to make a campaign for it late that year among the bars in the area, he and perhaps any associates got majorly heaped with abuse ranging from it being called a terrible song up to accusations of insulting Saitama (the title probably didn't help) and even getting drinks poured onto them. Ironically, though, there were radio stations outside of the Kanto region such as NHK-FM's Tokushima which had "Naze ka Saitama" hitting the top spot in requests for being this rather odd number.

The following year, the notoriety of "Naze ka Saitama" led it to being released by a major label, For Life Records, and strangely enough, the single became a hit, selling 120,000 records and reaching No. 100 on the Oricon weeklies. On top of that, according to For Life, the cable radio networks within the older Tokyo districts had "Naze ka Saitama" getting into their Top 10 lists. And yet, according to a 2019 article in the Nikkan Sports newspaper via J-Wiki, local Saitama residents still have very tepid feelings toward it and young ladies even felt the need to get out of the prefecture ASAP. On the other hand, though, there are others who were grateful that any sort of song about their province was made.

Personally, having listened to "Naze ka Saitama" a few times, I've just treated the song as a typical straight-ahead pleasant Mood Kayo whose lyrics talk about love in Saitama, and it seems like Saita has treated it in the same way. Once again, through J-Wiki with the specific source being the journal "Shuukan Heibon"（週刊平凡）via a 1981 issue, Saita commented "I treat it as a regular enka and not a comical song. I wonder why it's considered funny despite that I sing it in all seriousness". He also mentioned that the lyrics don't really mean anything. In any case, if there are any viewers of this blog based in Saitama Prefecture, let me know how you feel about the song.

Wow! I actually found that NHK kayo broadcast with some big names singing "Naze ka Saitama". Happily enough, the comments underneath the YouTube video were complimentary. Ah, by the way, I did make another venture to Kawagoe during my last visit to Japan in 2017 and you can read about that at "Kawagoe, Part 3", "Part 2" and "Part 1".