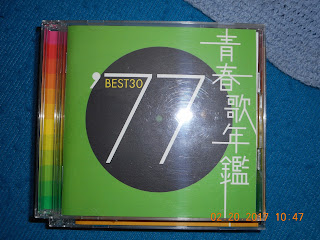 At this point, there really hasn't been any media announcement about it outside of J-Wiki and a Facebook page, but unfortunately for the rock band Sentimental City Romance（センチメンタル・シティ・ロマンス）and their fans, they lost a prime member in the last few days. Guitarist and vocalist Tokuo Nakano（中野督夫）passed away on July 27th of a subarachnoid hemorrhage at the age of 67. I'd just written about "U.S. Time Machine"（U.S.タイムマシーン）, a track from one of their 1970s albums, "Holiday"（ホリディ）, earlier this month. I actually found out about the news of Nakano's passing from my good friend, Rocket Brown of "Come Along Radio", while we were doing a taping of another podcast this afternoon.
Nakano was born in Nagoya, Aichi Prefecture in February 1954 and outside of his work with Sentimental City Romance, he was also providing support to other singers such as Mariya Takeuchi（竹内まりや）, EPO and Hiroko Yakushimaru（薬師丸ひろ子）through songwriting and backing musician support. He also released three solo albums between 1997 and 2016.
As a tribute, I'm putting up a couple of Sentimental City Romance songs up here to show some of the band's versatility during some of their career. The aforementioned "U.S. Time Machine" from 1976 was about their roots rock roots. But the above video has SCR's "Potato Chips Kajirusuriru" (Gnawing on Potato Chips) from their December 1977 album "City Magic". Written and composed by fellow guitarist and leader Nobutaka Tsugei（告井延隆）, this strikes me as being a gritty and subdued urban rock tune with some hazy hints of progressive rock as someone slowly gets overwhelmed by life among the bright lights in the metropolis with only his potato chips to console him. I can imagine the poor fellow walking the seedy streets of 1970s Kabukicho, a notorious district in East Shinjuku.
KKP contributor nikala was the first person to bring SCR into the blog with her articles on "Flight Tonight" and "Miss Biscuit", both of which appeared on the band's November 1982 album "Dancing". What was interesting about these two was that the album was Sentimental City Romance's foray into a more AOR direction. Another track is "Turning Point" at 3:28 of the above video (Track 2) which was co-written by Nakano and Takao Ito（いとうたかお）and composed by Nakano. I think that this particular song has more of that TOTO AOR/rock edge to it as Nakano sings about overcoming all the bricks and sticks being thrown and knowing that there is always a brighter tomorrow...a theme that all of the current Olympians in Tokyo would be happy to accept.
In any case, I would like to offer my condolences to Nakano's family, friends and fans out there. YouTuber Toru Imai uploaded the following video to his channel featuring Nakano and friends covering "Downtown".
Posted by J-Canuck at 11:10 PM