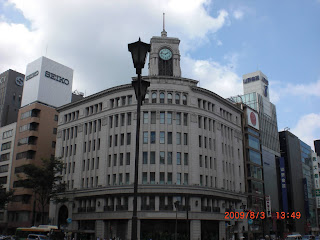 Our resident enka and Mood Kayo expert, Noelle Tham, was the first to introduce kayo singer Koichi Miura（三浦洸一）onto the pages of our blog back in 2018 with the gallant enka of "Ochiba Shigure" (落葉しぐれ)  and then the jaunty marching beat of "Benten Kozo" (弁天小僧). Just to provide some background on the singer, Miura was born Toshiyasu Kuwata（桑田利康）on New Year's Day 1928 and his stage name was based on the fact that he was born in the city of Miura in Kanagawa Prefecture. He attended what is now known as the Tokyo College of Music and after his graduation, he entered Japan Victor Records in 1952 and became the protégé of composer Tadashi Yoshida（吉田正）.

With "Ochiba Shigure" and "Benten Kozo" becoming his first hits in 1953 and 1955 respectively, my contribution to the Miura file will be "Tokyo no Hito" (Tokyo People) which was also the theme song for a movie of the same name released in 1956.

Not sure if I can categorize "Tokyo no Hito" as either an enka or a Mood Kayo (although the melody by his mentor Yoshida seems to lean towards the latter). I think in the end, I would put it as that typical orchestral kayo that was seemingly made as theme songs for cinematic dramas in the nation in those days. It seems to have that somewhat melancholy feeling with a plucky guitar and a sad muted trumpet in the background as if they were describing one of the characters in the movie who is down on his/her luck in the big unforgiving city.

Lyrics were provided by another kayo veteran of the time, Takao Saeki（佐伯孝夫）, and they describe the usual trials and tribulations of love with plenty of namedropping of the various quarters in Tokyo such as Ginza, Asakusa and Shibuya. Incidentally, Miura appeared on the Kohaku Utagassen eight times between 1955 and 1963 but none of his songs included "Tokyo no Hito".

I don't know what Miura is doing at the age of 93 but his J-Wiki profile states that he had never gotten a driver's license, preferring to leave the wheel to either his wife or manager. At least there is one thing that he and I have in common.