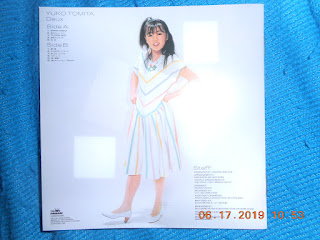 It's been about 18 months since I actually put up an article devoted to pop singer-songwriter Yuko Tomita（とみたゆう子）so I figured that it was time to feature her again as the topic of the first KKP article for July 2021.

Tomita is someone that I've gotten to know because of my work on the blog over the past decade, and as such, I've been able to glean that she's more in the softer side of pop: AOR, Fashion Music/Baroque Pop and balladry. Therefore, it's no surprise that I've come across this B-side to her March 1982 3rd single "Bobby", "Yukidoke no Hi" (Thaw Day).

Beginning with some hard piano strikes, "Yukidoke no Hi", which was written and composed by the singer, takes on the arrangement of a gentle waltz as Tomita sings (I believe) about a woman in a small wintry town perhaps still harbouring feelings for a fellow who has long since left home for a bigger environment. At the very least, she is sending those pen-and-paper letters to him. I think that this is a good cocoa-sipping tune on those cold nights...ironic, considering the time that I'm typing this. Mind you, it's not as hot as it was earlier in the week here in Toronto but summer has nonetheless arrived.