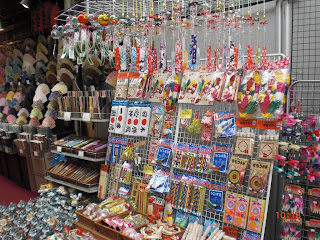 Admittedly, I've never seen a Hibari Misora（美空ひばり）movie in its entirety but from her appearances on stage to sing, I had always seen the Queen of Kayo Kyoku as a classy entertainer who had more than enough polished charisma to intimidate even the most veteran of celebrities.

Unfortunately, I couldn't find any video evidence of this particular movie that Misora had starred in called "Tokyo Beranmee Musume"（東京べらんめえ娘...The Tokyo Dame）. Released in 1959, the then-22-year-old star played a kanban musume（看板娘）or (according to the Jisho.org definition) a pretty girl who attracted customers to come inside a sushi shop but was actually quite the rough-and-tumble woman with a mouth to match.

However, I did find the theme song for "Tokyo Beranmee Musume", "Ohkawa Nagashi" (Adrift in the Big River). Also released as her 152nd single in March of that year, this was another song written and composed by Masao Yoneyama（米山正夫）for Misora. My previous article on her had Yoneyama also creating a couple of songs for her 138th single in 1958, "Hanagasa Douchuu"（花笠道中） and "Rockabilly Kenpou"（ロカビリー剣法）.

"Ohkawa Nagashi" is a quintessential enka about the ever-flowing Sumida River in Tokyo which runs along areas such as Asakusa, and though I've never seen "Tokyo Beranmee Musume", I can imagine that Misora performed the theme in front of everyone in a pivotal scene. Pure speculation but perhaps the plot of the movie was similar to that of "My Fair Lady" in which a similarly rough-and-tumble Cockney flower seller gets transformed into someone to be presented proudly among the high class of London. Interestingly enough, "Tokyo Beranmee Musume" came out just a few years after the Broadway premiere of "My Fair Lady" and just a few years before the Hollywood release of "My Fair Lady" on celluloid. Then again, Misora's character could just be someone who had different sides to her right from the beginning.