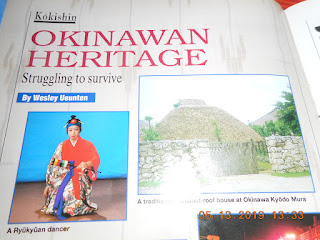 In terms of the global birthplaces of the genre known as techno, I've often thought of regions such as Detroit in America and then Germany because of Kraftwerk. Basically, major cities around the planet like Tokyo, Paris and London can come to mind, too.

The prefecture of Okinawa hadn't come to mind, though. When it comes to Japan's southernmost province, my usual thoughts fly to resorts, a distinctive culture, long-lived residents and goya champloo, but not a techno scene. And yet, several years ago in the blog, I found out about the Okinawan techno duo Ryukyudisko whose tonsorial schtick is dressing up like a couple of Ryukyuan nobles whenever they present their blend of Okinawan melodies and techno.

Moreover, commenter James Noah recently cottoned me onto another electronic music duo incorporating Okinawan sounds that predated Ryukyudisko by a couple of years or so. Ryukyu Underground（琉球アンダーグラウンド）is made up of Newcastle-born but Okinawa-based Keith Gordon and Jon Taylor who currently lives in Los Angeles according to the Wikipedia article about them.

Ryukyu Underground began with their self-titled album in 2002 and then came their 2003 second album "Mo Ashibi" (which translates as Hair Play [?]) from which I give you the title track. Again, not being well-versed in the techno world at least when it comes to identifying its sub-genres, I can't tell you which type of electronica Gordon and Taylor mixed into the traditional Okinawan music but "Mo Ashibi" has that half-and-half of dance excitement and exotic mystery. It truly relates itself as an adventure progressing in the underground of Naha.

James was also kind enough to show me a remix version of "Mo Ashibi" by Jason Bentley in the 2005 "Buddha Bar VII". Ryukyu Underground has released 6 albums and 5 maxi-singles up to 2009 and as has been the case with "Buddha Bar VII", the duo has contributed to a number of compilation releases.