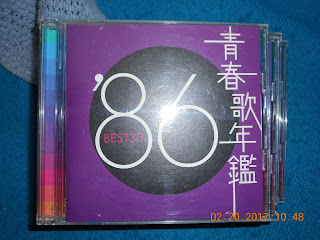 The last time I wrote about singer-songwriter Tetsuji Hayashi（林哲司）in his performing mode was through his mellow 1977 album "Back Mirror". Indeed, it just possessed all of that 1970s City Pop goodness, and I was fortunate to have been able to get my own copy of it.

Currently, though, I don't have a CD of Hayashi's September 1986 album "Nine Stories ~ Longtime Romance" so I can only speculate about his melodic themes in this release some nine years following "Back Mirror". However, from listening to the second track "Hidari Mune no Seiza", I gather that he was incorporating some of those inspirations for melodies for one of his major clients during that decade, Omega Tribe, into his own creations.

"Hidari Mune no Seiza" translates into The Constellation on the Left Chest which rather got my curiosity peaked on first read. Lyricist Chinfa Kan（康珍化）who has also helped Omega Tribe and Hayashi was responsible for the words here, and he weaves a story of romantic intrigue that makes me imagine some high-class wining, dining and dancing in Monte Carlo since there's at least one reference to gambling. In any case, the reference to the title doesn't come until the end of the song; maybe it's a tattoo? Well, it's a steamy night regardless.

But as I said, it's Hayashi's music that really sparkles here literally with those certain Omega Tribe-reminiscent synthesizers, and I can imagine that band covering "Hidari Mune no Seiza" with aplomb if it hasn't already done so. Nothing says mid-80s J-urban contemporary than this music.