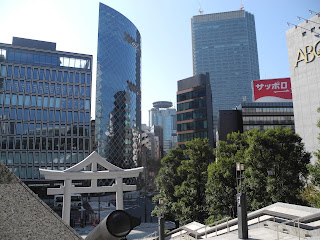 The above photo was shot midway up the steps toward Hie Shrine in Chiyoda Ward, Tokyo. I had wanted to take this picture of what seems to be a mass of traditional (the shrine gate) and the modern (skyscrapers) in the Akasaka background. If I'm not mistaken, I think that this was just after I had a delicious sushi lunch with my good friend and his wife.

Akasaka is one of the more expensive neighbourhoods in Tokyo but it also has plenty of wallet-reasonable restaurants and izakaya including a section which has a proliferation of Korean BBQ eateries. Apparently, it is also a setting for many a romantic Mood Kayo and I was able to find one in the form of "Ame no Akasaka" (Rainy Akasaka).

In its first iteration, this was the 15th single for the band Jackey Yoshikawa and his Blue Comets（ジャッキー吉川とブルー・コメッツ） released on Christmas Day 1968, and nope, it is most definitely not a Christmas song. Indeed, it is a Mood Kayo and it is the second such song for the Blue Comets after declaring that the group was no longer into Group Sounds. Beginning with "Sayonara no Ato de"（さよならのあとで）which was released a couple of months earlier in October, Yoshikawa and his Blue Comets decided to embrace the more traditional bar-friendly genre and shed their original guitar-based rock-n'-roll sound.

Yet, this creation by lyricist Jun Hashimoto（橋本淳）, Blue Comets member/composer Tsunaki Mihara（三原綱木）and arranger Kyohei Tsutsumi（筒美京平）still had some faint echoes of a slower GS sound probably due to that electric organ in there. Hashimoto's story of remembering a love affair in Akasaka which passed away sadly perhaps could also be transferred to the fate of the Blue Comets themselves in their original run. Although "Sayonara no Ato de" was another hit for the group by achieving a No. 3 ranking on the Oricon weeklies, "Ame no Akasaka" did more modestly by peaking at No. 20. The J-Wiki article for the song also mentioned that it was from this point that popularity for the band began to wane.

A few covers were done of the song over the decades since that initial release by the Blue Comets. It has never been made clear online when exactly a version by The Peanuts（ザ・ピーナッツ）was recorded but J-Wiki could only narrow it down to sometime in the early 1970s. Anyways, The Peanuts' version has probably made it onto many a Mood Kayo compilation or one of their own collections, and this one has more of a Henry Mancini feeling with those strings and less of that heaviness of the original.

Enka singer Hiroshi Kadokawa（角川博）also covered "Ame no Akasaka" through a cool and contemporary arrangement as his September 1989 single. It's still Mood Kayo but the strings are silkier and of course, a mellow sax solo has also been thrown in. Kadokawa also covered another rainy city in song years later.

The next time that I get back to Tokyo, I'm going to try and get some more night shots of Akasaka. 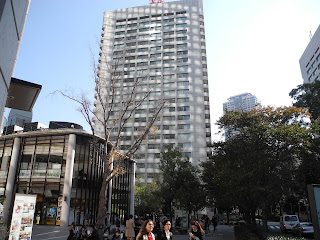