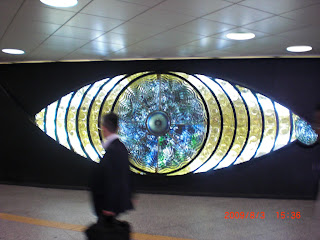 Ah, yes...the all-seeing, all-knowing Shinjuku Eye! Glad that I didn't pass by it all the time.

For your approval, I bring you Hiromi Miyano（宮野比呂美）, another in the long line of 80s aidoru that never got into the top tier of teenage singers such as Seiko Matsuda or Akina Nakamori（松田聖子・中森明菜）but had their five minutes in the spotlight, all the same. According to that aidoru page that I sometimes refer to, Miyano, who hails from Yamanashi Prefecture, only had a couple of singles under her belt before she called it a day in 1986.

Her debut single was "Yokohama Gigolo"（横浜ジゴロ）but the topic for this article is her B-side, "Ame no Suspicion" (Suspicion in the Rain) which seems to describe many a suspenseful scene in a Japanese drama. Released in July 1985, it's got that urgent techno aidoru beat which grabbed my ear initially, but I find Miyano's vocals here lacking in range and expression although I like the arrangement. There's also some similarity in the refrain to Hiroko Yakushimaru's（薬師丸ひろ子） "Sailor Fuku to Kikanjuu" （セーラー服と機関銃）. Lyrics were provided by Masao Urino（売野政男）while Makoto Kawaguchi（川口真）took care of the music and arrangement.