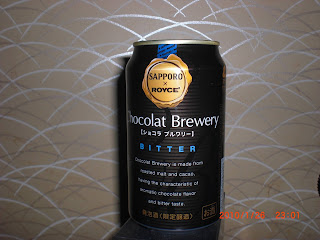 A little over a decade ago, I was rather intrigued by this campaign sparked by a collaboration between Sapporo Beer and Royce' the Japanese chocolate manufacturer to create some limited-edition chocolate beer for Valentine's Day. In fact, I was so curious about it that I actually bought a can of the stuff for consumption in my Ichikawa apartment. 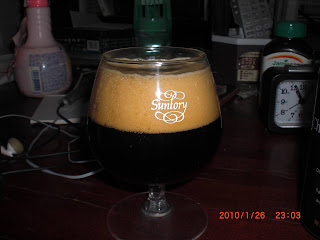 The above is indeed my very busy coffee table and dominating the photo is a goblet filled with the Sapporo and Royce' concoction of chocolate beer. During my 17 years in Japan, I never drank beer at home, although on occasion I made my own Brown Cows, so it was something for me to bring home this particular brew. It didn't sound as crazy as one would think initially because I think something like a pint of Guinness would have those taste notes of chocolate and/or molasses. Well, as it turned out, the chocolate beer really did taste like regular beer but then during the aftertaste, the chocolate did kick in. It wasn't a bad thing at all but it didn't change my rules on beer at home.

Anyways, I make my groan-worthy segue into the City Pop/AOR duo Beers, and I recall that one of the KKP commenters thanked me for introducing Megumi Saito（斉藤恵）and Yoko Takahashi（橋本ヨーコ）to him. You're very welcome, I will say, and also in return, I have another track that I didn't cover from their 1983 album "Mistress". "Hold Me", which was created by Takahashi and Saito (words and music respectively), is a journey into the Japanese equivalent of Margaritaville, thanks to the husky voices and the mellow Fender Rhodes, and it hints at that same feeling that I had after downing the entire goblet of Sapporo/Royce' chocolate beer. Fortunately, I didn't have work the next day.