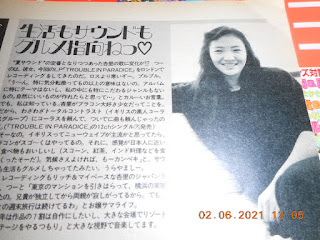 Well, for better or worse, the Tokyo Olympics are under way, and it appears that Japan has already gotten onto the medal list with a Gold and a Silver at least in judo. Canada came close in the Men's individual road race with Michael Woods coming in 5th. COVID hasn't taken it easy on the Olympic Village and now Tokyo has to contend with a typhoon potentially crashing the party in the middle of next week.

Of course, when we have Japan + Olympics, the result will be official theme songs and for the national broadcaster NHK, that has been the case since 1988 when Mari Hamada（浜田麻里）sang "Heart and Soul" for the Seoul Games. The commercial TV networks have also followed suit. For example, Misato Watanabe（渡辺美里）sang "My Love, Your Love" which was used as the Olympic theme by NTV for the 1996 Games in Atlanta while Anri（杏里）contributed her own "Ano Natsu ni Modoritai"（あの夏に戻りたい）for TV Asahi for the same competition.

Speaking of Anri, when the Winter Games arrived in Nagano, Japan in 1998, her 31st single, "SHARE Hitomi no Naka no Hero" (The Hero in My Eyes), had originally been released in November 1994 as this love ballad that the singer wrote and composed, but it was then selected to be the official Nagano Olympics song by the Japan Olympic Committee. In comparison with the pleasantly light and summery "Ano Natsu ni Modoritai" for the NTV coverage, "SHARE Hitomi no Naka no Hero" has a bit more gravitas and an inspirational mood which probably caught the JOC's eyes and ears.

"SHARE" was then given its own separate release in January 1998 as an Olympic single. The original peaked at No. 47 and can also be found as a track on "Anri The Best", her 9th BEST compilation released in May 2000. Meanwhile, the Olympic single, which also has an English version, only got as high as No. 78. Supposedly, both versions have different arrangements.

For me, the Nagano Olympics meant those Ski Jump Golds earned by Takanobu Okabe, Hiroya Saito, Masahiko Harada and Kazuyoshi Funaki. I was happy to see that victory live on TV in Ichikawa, but that was only because I was stuck at home with a busted ankle.😧