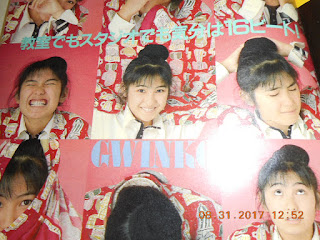 A couple of weeks ago, I received a comment under my article for GWINKO's "Natsu no Owari, Chikazuita Sora"（夏のおわり、近づいた空）. Rebecca made a recommendation for the opening track of her May 1991 album "Tokyo Uki Uki Girl"（東京UKIUKI GIRL...Tokyo Cheerful Girl）, "Heart ga Kiseki wo Matteiru" (The Heart is Waiting For a Miracle).

Nice recommendation, Rebecca. "Heart ga Kiseki wo Matteiru" is a percolating piece of that aspect of nostalgic R&B known as New Jack Swing, a genre that I'm still trying to wrap my head around since when I think of it, I usually come up with Bobby Brown's "Every Little Step" from 1989. Written by Goro Matsui（松井五郎）and composed by Ichiro Hada（羽田一郎）, try to imagine the refrain from Kylie Minogue's "I Should Be So Lucky" done in New Jack Swing rather than Eurobeat.

Matsui has come up with the story of a young woman going out on a date in the big city and Hada's music definitely shows that she's more than over the moon in anticipation. As I mentioned to Rebecca, it makes for a fine start to "Tokyo Uki Uki Girl" although that album cover is a tad sinister.