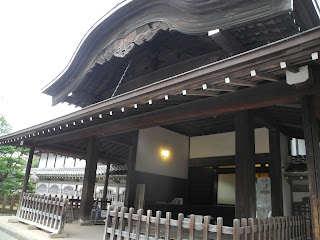 Earlier today, I did my weekly ROY article featuring Randy Newman's "I Love L.A." and one kayo that hit No. 3 on Oricon in the same month that Newman's album "Trouble in Paradise" was released was enka singer Eisaku Ohkawa's（大川栄策）big hit "Sazanka no Yado"（さざんかの宿）. In fact, I'd say that "Sazanka no Yado" is the song that Ohkawa is probably known for the most.

It has been a very long time since I put up an article featuring one of Ohkawa's songs (maybe 5 years) so after doing the ROY article, I figured that Ohkawa was due for some more attention. And so I opted to go with one of his very early singles, "Yanagawa no Hito" (Man of Yanagawa). This was his 3rd single from April 1970, and it was written by Miyuki Ishimoto（石本美由起）and composed by the late Masao Koga（古賀政男）, Ohkawa's mentor.

What caught my ears was Koga's enka melody which has an arrangement by Mitsuru Kotani（小谷充）that seems as if it was given a slight contemporary lift from what I've heard of the instrumentation and subtle key shifts. Ishimoto's lyrics first struck me as a story surrounding what I think is one of the quintessential traditional scenes in Japan, whether it be through karaoke videos or a historical drama: the slow cruise down a river lined by willow trees, and indeed, yanagawa translates into English as willow river.

However, after going through the lyrics, I've realized that "Yanagawa no Hito" is actually a go-tochi（ご当地）enka or traditional song about a specific region in Japan. In this particular case, Ohkawa is singing about the city of Yanagawa in southern Fukuoka Prefecture which is known for its canals. The key word in the lyrics which corrected my path about what the song was all about was Gonshan（ゴンシャン）, written in katakana. Putting it through the Yahoo Japan search engine pulled up multiple hits about a certain coffee shop known as Gonshan in Yanagawa. It's all quite poignant since the protagonist in "Yanagawa no Hito" is planning on leaving the city for a bigger place...perhaps Tokyo. The video below incidentally is of Yanagawa and it was created by Kevin Caption.

As I mentioned in the article for "Sazanka no Yado", Ohkawa had to go through many years without a hit before that big song from 1982 finally reached him. However, just judging from "Yanagawa no Hito" alone, I think perhaps a reappraisal of those perhaps forgotten tunes of his throughout the 1970s might be considered.
Posted by J-Canuck at 8:02 PM