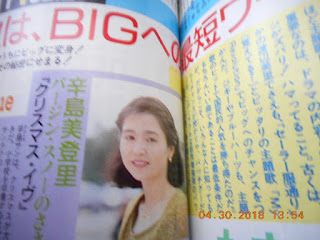 A bit late in the day, so to speak, but singer-songwriter Midori Karashima（辛島美登里）celebrated her 60th birthday on May 28th, and in Japanese culture, the 60th birthday is an auspicious one on the same level as how a 50th birthday would be celebrated in the West, perhaps. In fact, the 60th is known in Japanese as kanreki（還暦）, and for more information on it, you can take a look at this article on the significance of turning the big Six-O in Japan.
My previous article on Karashima-sensei (one of her nicknames) was back in September 2019 with "Anata wa Shiranai"（あなたは知らない...You Don't Know）. Well, I've got another poignant song of hers with that second-person singular personal pronoun, "Anata ni Kaerenai" (Can't Go Back to You) which was originally recorded on her 2nd album, "Good Afternoon", from May 1990.
Beginning with Karashima's piano playing, it is a really lush ballad especially with those strings backing her up. In fact, the first time I heard "Anata ni Kaerenai", there was that thrill which went up my spine. Karashima was responsible for words and music but Kei Wakakusa（若草恵）was behind the overall arrangement, and my compliments to him for bringing in that string section. I don't know whether "Anata ni Kaerenai", a song of remembrance over a past relationship, was her first dalliance with this sort of arrangement but I think that this combination of piano-and-strings has been a template for a Karashima song.
In 2004, Karashima released a BEST compilation of her self-covers called "Smile and Tears" which was separated into two parts, put out in May and October that year. The latter is "Namida ga Niji ni Kawaru Shunkan"（〜涙が虹にかわる瞬間〜...The Moment that Tears Change Into Rainbows） and it's on this album that her cover of "Anata ni Kaerenai" is placed. It's more stripped down with what sounds like a Fender Rhodes and a Latin guitar standing out as the main instruments.
This is the Sensei herself advertising a concert that was held on May 4th at Kyurian Hall which is basically the community centre for Shinagawa Ward in Tokyo. I actually got to go to the place itself many years ago to see an old friend perform.
Posted by J-Canuck at 2:41 PM