Ami Suzuki/TM Network -- Be Together 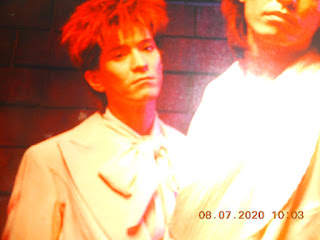 I always enjoy it when a song reveals even more of a backstory than I'd expected.

Weirdly enough, it all starts from one of the members of Franchouchou（フランシュシュ）from "Zombie Land Saga"（ゾンビランドサガ）fame that I'd just written about a few hours ago. Specifically, I'm talking about Zombie No. 5, aka the sultry-voiced courtesan Yuugiri（ゆうぎり）played by seiyuu Rika Kinugawa（衣川里佳）. Apparently when she's not practicing and performing with the group, she's got a side gig as the hostess for an intimate little pub called Snack Chinatsu, and in one of the videos displaying her arubaito there, she regularly provides some music of her own.

At the 28:30 mark, she performs a song that I hadn't heard in years and years. This is another example of one of those old chestnuts having slipped my memories and having it thrown back at me through pure happenstance.

I probably have mentioned it in one of the past articles that I've done about turn-of-the-century pop singer Ami Suzuki（鈴木あみ）but she had her star soaring into the ionosphere in the late 1990s until some contractual disputes brought her career to a crashing halt for a year or two. But as I stated just now, until then, she was one of those singers who seemed to be everywhere in media everyday.

That song that Yuugiri covered at Snack Chinatsu? It was a Suzuki hit: "Be Together", her 7th single from July 1999. Written by Mitsuko Komuro（小室みつ子）and composed by Tetsuya Komuro（小室哲哉）, yep, I now remember that this was playing all over the place as well. Never bought the CD single but I still kept on hearing the song and seeing Suzuki showing up on the music shows such as "Music Station". This became her first No. 1 single and her most successful one, selling more than 800,000 copies. "Be Together" would also become the 17th-ranked single of the year and it got her an invitation to perform on NHK's Kohaku Utagassen.

What I hadn't also realized was that the song was also used for commercials plugging Mosburger. I didn't go to that famous Japanese fast food chain as often as I'd wanted since it didn't seem to be as plentiful as the Golden Arches or Lotteria. However, Mosburger's policy has been to always make their burgers fresh which lengthened the waiting time but what came out was hot and very tasty.

One other thing that I hadn't realized was that the Suzuki hit was actually a cover for an original song by rock band TM Network which included Tetsuya Komuro within its ranks. It was never released as a single but it was a track on the band's 5th studio album "humansystem" from November 1987. The arrangement by Komuro back then was quite different as it was created as this pop/rock tune that keeps chugging away thanks to the keyboards and bang-bang-bang percussion. Interestingly, Suzuki's version has that taste of Komuro in the 1990s when he was behind the controls of that Komuro steamroller of pop music whereas the original version sounds very...well, TMN-esque. By the end of TMN's original, I would probably need a tissue to wipe away the sweat. Incidentally, "humansystem" hit No. 1 on Oricon.

I may have to visit Snack Chinatsu a few more times to get my memory jogged.