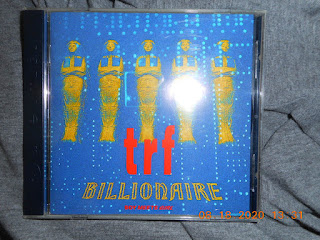 For the first time in a long time, I gave my 1994 trf album "Billionaire" a spin. Some of the songs by this major group under the aegis of songwriting/producing maestro Tetsuya Komuro（小室哲哉）not only became some of the first entries in "Kayo Kyoku Plus", they also represented the pop music that greeted me when I began my second long stint in Japan from November 1994. "Boy Meets Girl" and "Survival Dance" were the hit tunes that I was catching everywhere when trf was one of the several cogs running the Komuro Steamroller from the mid-1990s.

With a trf hit, it's usually about the beats and the high-energy arrangements and dancing involving the band members such as YUKI and Sam. But while I was listening to "Billionaire" this afternoon, I also heard something a little softer by them called "TRUTH’94（UNPLUGGED STYLE MIX)". This was based on the original song that came from their February 1993 debut album, "trf 〜THIS IS THE TRUTH〜".

I realized that I've labeled it as a technopop tune but I think the pop balladry is more emphasized here than the synths actually. Written and composed by Komuro, "Truth" has a lot of that sweetness over the bleeps and bloops that makes it stand out. According to an April 1993 interview in the Sony magazine "Guitar Book" via the J-Wiki article for "trf 〜THIS IS THE TRUTH〜", the concept of the song deals with a young ambitious woman who is pushing ahead with her career all on her own while not trying to show any sort of weakness when she suddenly falls in love.

The version that I listened to today is right here. "TRUTH’94" is even more poignant with the piano being the main instrument. As for "trf 〜THIS IS THE TRUTH〜", it peaked at No. 14 on Oricon while "Billionaire", trf's 4th album hit No. 1 and ended up as the 6th-ranked album of 1994.