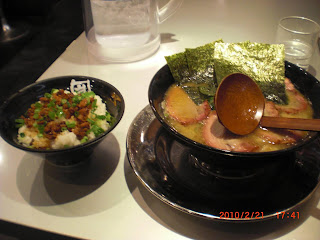 A little over ten days ago, I was happy to give my thoughts on the return of "Kobayashi-san Chi no Maid Dragon S"（小林さんちのメイドラゴン...Miss Kobayashi's Dragon Maid S） spearheaded with that extremely catchy opening theme song, "Ai no Supreme!"（愛のシュプリーム！）by fhana. Well, along with that second season, I've also started re-watching another slice-of-life anime that came out a year after "Kobayashi-san", and it turns out that it also had a rather reserved K-san in there, too.
Yes, I'm talking about the 2018 anime "Rāmen Daisuki Koizumi-san"（ラーメン大好き小泉さん...Ms. Koizumi Loves Ramen Noodles）, so instead of a lady being surrounded by dragons, it's a high school student obsessed with lots and lots of ramen. I first saw the show back in the pre-COVID days when my anime buddy used to have our biweekly anime-and-meals session at his place on Sundays, and true to great scheduling, my friend would always show it just before our dinner run; not that we always went for ramen afterwards.
I recall that within a couple of months of watching the episodes, I quickly put up the also-just-as-catchy opening and ending themes for "Koizumi-san": Minori Suzuki's（鈴木みのり）"FEELING AROUND" and Shiena Nishizawa's（西沢幸奏）"LOVE MEN HOLIC" respectively. However, watching the first two episodes again earlier tonight, I was reminded that there was also something aurally attractive about the soundtrack concocted by rock band Sunny Day Service（サニーデイ・サービス）bassist Takashi Tanaka（田中貴）and composer Shinichi Hosono（細野しんいち）. So, maybe before I retire tonight, I can put up some of the tracks. There are 43 of them so I'm going to be very sparing.
This is the one that has haunted my ramen dreams and it's the track that I've identified the ramen-obsessed Ms. Koizumi with. "Kyou mo Dokoka de (pf version)"（今日もどこかで...Somewhere Again Today） seems to be her theme because it just matches the elegant but glacial beauty that she is (at least, until she downs a bowl of the good stuff) with that haunting piano playing. Another thing is that the track has always stood out to me as being a creation that would belong to an actual live-action J-drama on the order of the "Tokyo Love Story"（東京ラブストーリー）soundtrack. Perhaps it's because it does remind me a lot of enka singer Sayuri Ishikawa's（石川さゆり）jazzy torch song "Whiskey ga O-Suki deshou?" (ウィスキーが、お好きでしょ）.
Not surprisingly, the next track that I remember is the original "Kyou mo Dokoka de" which serves as Track 1. Instead of the lonely piano, it's a group of plucky strings playing the melody that I usually hear in the especially lighter scenes; not that "Ms. Koizumi" ever got all that heavy...any heaviness was in the delectable broth.
The rest of the tracks are ones that I will have to be reminded of once I get through the episodes again. But one that has struck me is "Miwaku no Exotic Ramen"（魅惑のエキゾチックラーメン...Captivating Exotic Ramen） which could have been playing in Episode 2 when Ms. Koizumi and the steady-on Jun were eating the pineapple ramen (no, I don't think I will). It sounds like something from a Tin Pan Alley album in the 1970s and I had all sorts of Tiki bar images as I was listening to it.
On the other hand, "24-Hour Ramen People"（24アワー・ラーメン・ピープル）takes listeners into the current times of Japanese urban contemporary with those synths and that certain mellow guitar. For some reason, I began thinking of Sakanaction, Kirinji and Ryusenkei.
One more track that I'll ladle into your bowl is "On the Road -Itsuka Kimi to Kita Mise-"（いつか君と来た店...The Shop that You and I Went to Someday） that has that sensation of the guitar pop/rock which was on the rise in the early-to-mid 1990s with bands like Spitz and Mr. Children, although it's the electric organ that is the star of the show. 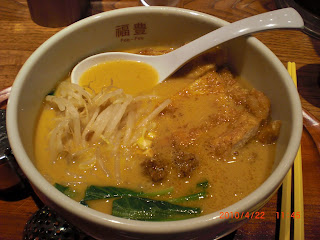 It's been around 18 months since I had a bowl of ramen in Toronto that didn't come in a Styrofoam cup or come from a plastic package but I haven't gone into a fetal position of despair since frankly the first two decades plus of my life were spent not really having the authentic ramen-ya variety, so I'm patient. Still, I am hoping that I will be able to visit a Kinton, Touhenboku or Santouka fairly soon again now that my city is in Stage 3 of the re-opening.
Posted by J-Canuck at 10:59 PM