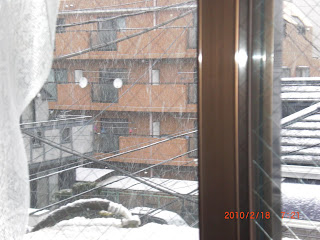 The above photo is a snowy February 2010 shot from my old humble apartment in Fukuei 3-chome in Ichikawa City, Chiba Prefecture. I've mentioned about the former abode a number of times over the past decade on the blog but just to refresh or newly educate readers, Ichikawa is basically a bedroom town or city for Tokyo which spreads out over a wide area. I lived 10 minutes away on foot from Minami-Gyotoku Station on the Tozai Line, one line in the Tokyo Metro system which was either the longest or the second-longest line in the network.

In retrospect, living in Ichikawa wasn't inexpensive at all. Along with the income tax, there was also the city tax and the big hammer of National Health Insurance payments eight times a year. But having said that, I still have fond memories of living in the very convenient neighbourhood of Minami-Gyotoku（南行徳）, or Nangyo as the locals would say it, especially with the urban geographical tradition of having all sorts of shops and restaurants nestled directly underneath the tracks themselves. There were four supermarkets all within walking distance of my home, just as many convenience stores, and my go-to eateries of Tonki (tonkatsu), Niki (patisserie) and that ramen chain known for its heaping mounds of garlic added to the soup (not surprisingly, I only ate there on non-teaching nights). So I am always grateful to the fellow who uploaded this video memory of my old neighbourhood, Peaky Salty.

However, when I was watching my old memory, I then discovered this song called "Minami Gyotoku Sunrise" much to my surprise. This was created by a fellow named Bleekseeker for his April 2014 album "Tokyo Sleeper Train", which may be referring to the Tozai Line since my old subway was indeed that for folks coming home late from Tokyo into the boonies. Commuters were always sleeping it off on the seats or on the handrails.

Sunrise usually came at around 4:30 am to Japan, and since my apartment faced east, I got a huge wallop of the sun into my bedroom which, along with early morning tremors, often but not always woke me up. Yet, I never thought that "Minami Gyotoku Sunrise" would sound so dramatic. There is something very Vangelis-doing-"Blade Runner" epic about this track, and I started getting reminded of huge monolithic buildings and spinners scooting about in the air as I listened to these 3 minutes and change. Not sure how I would describe this form of techno: ambient, perhaps?

One other track on "Tokyo Sleeper Train" is "Tsudanuma Sanctuary" which is referring to another Chiba city east of Ichikawa so I'm wondering if Bleekseeker used to live in the area as well. Other than that, I really couldn't find out anything about him or her but I did find their Facebook page.