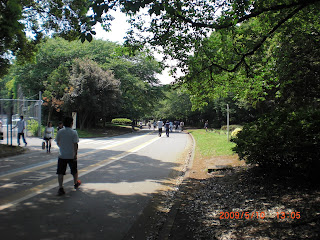 Happy Monday! Perhaps a bit late in the year to do this one since this is titled "Haru no Uta" (Song of Spring) but, hey, it's warm and jaunty...just the thing to start off this final week in July. Besides, there's a bit of a story behind this one that I hadn't been aware about.

The term "heavy rotation" has been internalized within anyone who listens to music often enough, and there's even an AKB48 hit that has that very title. Certainly during my years growing up, I've noticed which songs were getting a ton of airplay on the radio and, for that matter, which music videos were getting their heavy rotation on television.

Well, I found out that almost a century ago, Japan had their own early version of heavy rotation through a radio program called "Kokumin Kayo"（国民歌謡...The People's Kayo） which was on the air between 1936 and 1941. Said program featured a new kayo and played it every night for a week from Monday to Saturday during its 5-minute time from 12:35 am. That was a heck of a time to play a song that wanted to become a hit. I guess folks really liked listening to the radio that late.

Anyways, one such song that did get the Queen Bee treatment was "Haru no Uta" which was written by Gen Uchida*（内田元）and composed by Kunizo Kishi（喜志邦三）. It was first featured on "Kokumin Kayo" from March 1 1937 and was sung by Mitsuko Watanabe（渡辺光子）, a Showa Era singer who had apparently gone by a lot of stage names such as Haruko Wada（和田春子）, Nobuko Kawashima（川島信子）and Ayako Kawase（川瀬綾子）. For "Haru no Uta", though, her official stage name at that time was Mitsuko Tsukimura（月村光子）. It became a huge hit once it went on sale on that old 78 rpm later in July, and it was certainly a skip-worthy song to celebrate the coming of the green season.

To be honest, I'd encountered the cover version of "Haru no Uta" first via Sayuri Ishikawa's（石川さゆり）1974 2nd album "Omoide/Aoi Sanmyaku"（おもいで・青い山脈...Memories/The Blue Mountains） during her early aidoru phase. I had simply assumed that "Haru no Uta" was a song that was originally created for Ishikawa since my impression was that the then-teenaged singer was singing all these very cutesy kayo. Her take on the 1937 original was also in that vein with the marimba and mariachi trumpets playing away, a combination back then that I usually associated with comical or kiddy tunes.

*「元」can be pronounced as Gen, Moto or a number of other ways as a given name. If anyone can confirm the lyricist's name, that would be greatly appreciated.