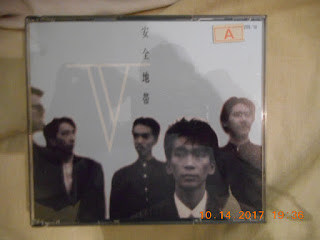 The first time that I wrote about one of Anzen Chitai's（安全地帯）big albums, "V", was back in the summer of 2012, and even before that article, I'd already covered one of the songs there that has become a karaoke staple for the older of us, "Natsu no Owari no Harmony" (夏の終わりのハーモニー）. Frankly since then, I've covered more of the 36 tracks in total over the years of "Kayo Kyoku Plus" individually: "Suki sa" （好きさ）, "Gin'iro no Pistol" （銀色のピストル）, "Yakusoku" （約束）, "Parade ga Yatte Kuru"（パレードがやってくる）and "Tooku e（遠くへ）/Miss Miss Kiss".

And Koji Tamaki（玉置浩二）and crew just keep on giving with this album of the Anzen Chitai sound, City Pop, jazz and blues. So much so that I've decided to get a little side project going of covering what remains in the massive "V" which had originally taken up three full LPs but has had the CD version covering it in two discs. Until I'm finished and/or I can no longer find anything from "V" on YouTube, I'll probably keep at it on a monthly basis. But just to keep my sanity and retain my laziness, I will follow up by each of the original LP sides...hence the title above of "Friends, Side 1" Apparently what I hadn't known was that each of the LPs had their own title: "Friends", "Suki sa" and "Harmony".

Well, from "Friends, Side 1", I've already covered the first two tracks of "Tooku e" and "Miss Miss Kiss" as cited above, and there is the final track, the single "Friend" which was covered in the original article for "V". Incidentally, all tracks were written by Goro Matsui（松井五郎）and composed by vocalist Tamaki.

Tracks 3 and 4 of that Side 1 are "Party"（パーティー）and "Futari de Odorou"（ふたりで踊ろう...Let's Dance） which make up two sides of the same coin especially with a fuzzy foreshadowing of the latter song starting off "Party". As for "Party", Tamaki delivers a teasing and whispery affirmation about a woman getting ready for that huge soiree somewhere in the city. There is almost something borderline stalker-y but before we get into criminal proceedings, allow me to say that there is also new and old with the Fender Rhodes and synth-strings. But then a little over halfway in comes "Futari de Odorou" which is louder and splashier as that party gets into high gear and Tamaki exhorts everyone to get onto the dance floor with all those horns. That latter song is another hybrid of the traditional Anzen Chitai sound with some of that fusion that the band wanted to introduce in "V".

I remember watching the VHS video for the concert version for "V" and it began with the tandem of "Party" and "Futari de Odorou". Fine choice, too, since "Party" was all about the preparations before the big event and then with "Futari de Odorou", Tamaki flies up on stage for all to enjoy.

"Silhouette"（シルエット）is a dreamy ballad that has Tamaki doing his usual wonderful achingly tenderhearted delivery of love between a couple. It's very short at under two minutes and it seems to serves as an interlude between the party of "Futari de Odorou" and the dramatic "Friend" which finishes up the side. I guess, in a way, it's a cooling AOR breather with the hint of a nice flugelhorn chaser.

Hope to have Side 2 up and running early in August.