EVE -- Namida no Night in Tokyo（涙のNIGHT IN TOKYO） 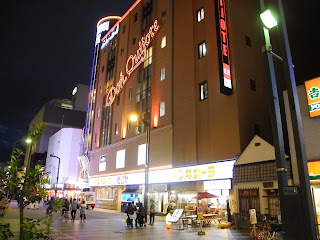 As I mentioned in the first article devoted to this chorus group consisting of the three Shinzato（新里）sisters, Leona, Clara and Lilika, EVE seemed to be basically part and parcel of pretty much every Japanese pop album created in the 1980s and perhaps beyond as the backup trio. I'd probably think that the one other super-prolific musician listed in many a liner note booklet, saxophonist Jake H. Concepcion, probably treated the ladies as virtual neighbours.
Yet, hearing them perform on their own is still fairly rare to me, thus the only other KKP article starring EVE is their 1976 cover of "Never Can Say Goodbye". However, I do have their second entry right here which is a track from their 2nd original album "Passion", released in May 1987.
I've heard "Namida no Night in Tokyo" (A Tearful Night in Tokyo) a number of times now, and to be frank, depending on my mood, I've taken the song as a slick Japanese urban contemporary number or I've cringed a bit at the somewhat overwrought delivery by EVE. But just to reiterate, that all depends on how I'm feeling. There's a bit of vocal cheese in there, but then again I do like fondue (yes, and chocolate, too). Moreover, fondue is a really rich and perhaps pricey dish in my eyes, and "Namida no Night in Tokyo" fairly gushes over with that Bubble Era sensation of living the crazy high life in the late 1980s version of the megalopolis.
Written by Ben Uozumi（魚住勉）and Brian Richy and composed/arranged by Koji Makaino（馬飼野康二）with the arrangement being done under one of his pseudonyms, Mark Davis, "Namida no Night in Tokyo", through its title and the melancholy melody, comes across as a 1960s Mood Kayo brought forward and contemporized into a 1980s nocturnal West Shinjuku/Akasaka City Pop tune. Furthermore, Makaino's creation reminds me of a couple of other songs: there are echoes of WHAM!'s "Where Did Your Heart Go?" and Michael Frank's "Antonio's Song", both of which I have enjoyed. I will definitely have to give some attention to the latter ballad for a future ROY article.
Posted by J-Canuck at 7:45 PM