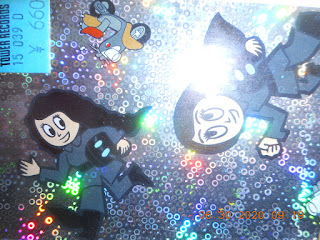 Having grown up as one of the final batches of baby boomers going into the 1970s and onwards, cartoons usually meant Saturday mornings although there were "The Flintstones" and some of the Warner Bros. stuff in the late afternoon. But that was about as late as it got in terms of time. Mind you, early Saturday evening at 5 o'clock meant "The Bugs Bunny/Road Runner Hour" for my brother and me, and along with getting our fill of Wile E. Coyote going on his quixotic quest to nab that road runner, the hour was also the first time that I got to see Bugs and Elmer Fudd's classic tribute to "The Barber of Seville".

I couldn't even imagine as a kid in Canada any cartoon being shown when the night was already upon us (I hadn't known at the time that "The Flintstones" was the first prime-time cartoon ever shown on American TV), but in Japan, I gather that the daytime/nighttime barrier was no barrier to anime. "Sailor Moon" is usually the example that I come up with when it comes to near-prime time animation although I'm pretty sure that there had been many such examples in the past. And of course, on Sunday nights on Fuji-TV, there was the dinner hour of "Chibi Maruko-chan" and "Sazae-san". Had many a karaage bento in front of the TV.

Recently, I found out about this Monday-night anime and kids' variety show which started in the late 2000s titled "Shimajiro no Wow!"（しまじろうのわお!...Shimajiro's Wow!）broadcast on TV Tokyo with the original source being TV Setouchi covering Okayama and Kagawa Prefectures. The character of Shimajiro the tiger is one that I've seen from time to time on the telly (through commercials for children's stationery), but not really all that knowledgeable about.

The duo of PUFFY has been no stranger to anison since Ami and Yumi have provided an opener for the underrated "Usagi Drop"（うさぎドロップ...Bunny Drop） and recently an ending theme to the aforementioned "Chibi Maruko-chan". Well, they also contributed an ending theme as well for "Shimajiro no Wow!" called "Tomodachi no Wow!" (Friends' Wow!). Serving also as PUFFY's 32nd single, the song had me at "Wow!" in terms of grabbing my ears and mind, and having listened to it again, the chorus is now probably going to be burrowing into my brain for the weekend.

Not surprisingly, the earworminess of "Tomodachi no Wow!" can be credited to PUFFY's delivery and also to the songwriter, Takkyu Ishino（石野卓球）of the techno unit Denki Groove（電気グルーヴ）. And what kids wouldn't want to do the Wow! dance with PUFFY against that catchy beat? Released in May 2012, "Tomodachi no Wow!" peaked at No. 85 on Oricon.