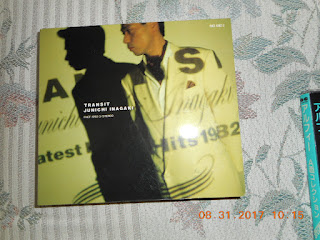 The very first song that I had ever heard from City Pop/J-AOR crooner Junichi Inagaki（稲垣潤一）was "Natsu no Claxon", this very relaxing end-of-summer ballad that I saw performed by the Sendai-born singer-songwriter on an early morning episode of Fuji-TV's "19xx" while I was shivering in my futon in snowbound Gunma Prefecture. Listening to this one was enough for me to get my first Inagaki album which turned out to be "TRANSIT", his 2-CD BEST compilation released in December 1990. "TRANSIT" was actually his 6th collection of his best stuff and it hit No. 7 on the Oricon weeklies.

Seeing that cover of him in the cool pale clothing and the tasteful silhouette, I figured that Inagaki was going to be about the classy urban contemporary. But as I gradually discovered over repeated playings of the discs, within that particular genre, the singer touched upon a number of influences whether it be Doobie Bros. AOR, some light doo-wop or down-home City Pop.

In any case, because of the number of total tracks involved, I've decided to do this first entry for "TRANSIT" by focusing on the entries for Disc 1 only today. Several of those have already gotten their own articles so you can click on the links. By the way, all of the tracks featured here were arranged by Akira Inoue（井上鑑）.

First off is "Aoi Tsuioku" (Blue Recollections) which was the B-side to Inagaki's 3rd single "Dramatic Rain" released in October 1982. Written by Reiko Yukawa（湯川れい子）and composed by Akira Mitake（見岳章）, as the title hints, it's a minor-key mid-tempo song about picking up the pieces after a breakup and realizing that there so many pieces remaining on the wet ground. It's got all of the feeling of a modern film noir in 1980s Tokyo but there is one passage near the end which actually shows a melodic beam of light shining in through the clouds for some reason. "Aoi Tsuioku" also ended up on Inagaki's debut album "246:3AM".

The opening notes for "Getsuyoubi ni wa Bara wo" (Monday Rose) struck me as being so Boz Scaggs or Bobby Caldwell. Also a track from "246:3AM", this is a gentle ballad over what seems to be a disagreement in the philosophy of love with one believing that love is nothing but a fleeting little game while the other feels that their relationship should be taken with the seriousness it needs. With lyrics by Yoshiaki Sagara（さがらよしあき）and music by Toyonobu Ito（伊藤豊昇）, I especially like the part near the end where Inagaki stretches out the title phrase of "Monday Rose".

"MARIA" is West Coast AOR concocted by lyricist Masao Urino（売野政男）and composer Tetsuji Hayashi（林哲司）and the message is clear as a bell...a guy is in love with a lass named Maria. Hopefully the lucky fellow and Maria are in that convertible bombing down the Ventura Freeway. "MARIA" was a track on Inagaki's 1983 3rd album "J.I.".

When I hear "Natsu no Yukue" (Summer Whereabouts) which followed "MARIA" on "J.I." and is the B-side to "Long Version", I gather that Inagaki had wanted to infuse some of that 1950s/1960s balladry into the music, thereby joining the likes of singers like Mariya Takeuchi（竹内まりや）. Once again, that oft-traveled theme of the end of summer meaning the end of romance is parlayed again as a man stands alone at the countryside cottage after his paramour has gone back home to the city. Maybe they'll have that tryst again next year or maybe not. AKB48 Svengali and lyricist Yasushi Akimoto（秋元康）provided the words while Kazuhiko Matsuo（松尾一彦）came up with the sweetly lilting melody.

This time, it was Akimoto and Hayashi working together to create "Iidasenakute" (Can't Say It) for "J.I.". A breakup doesn't sound much more bittersweet than this one, and with the shimmering strings and the electric guitar solo working with Inagaki's high-toned and resonant vocals, I wouldn't be tremendously surprised if there were quite a few fans who grabbed the nearest box of Kleenex. There are also some similarities between this one and "Long After Midnight".

From Inagaki's May 1984 4th album "Personally" comes "Kanashiki Diamond Ring" (Melancholy Diamond Ring) which has the singer returning to some of that old-fashioned vocal group pop. This song starts off the album and though it can be called bittersweet, there is more of the sweet rather than the bitter in this one written by Urino and composed by Hayashi. A man returns to his hometown to see an old flame getting married to another fellow and the wedding has him thinking about opportunities lost but well wishes given out all the same.

I really love the epic intro and the rich piano behind "Dare ga Tame ni..." (For Whom...) as Inagaki takes on a slightly more measured delivery and he sings about a happy relationship going through the usual things before the vows are taken. Also a track on "Personally", Sagara was the lyricist with Hayashi on music. I think among the ones that I've covered on this Disc 1, "Dare ga Tame ni..." is about as straight-ahead pop as I've heard so far.

But then we come to "J no Kanojo" (J's Girl) which is an upbeat pop number which launches his May 1985 5th album "No Strings". In fact, there is one frantic instrumental bridge that almost takes things into New Wave...and maybe a bit of Dire Straits thanks to the guitar. However, generally speaking, this is a good-time pop tune about having some risky thoughts for J's girl on the dance floor. I have no idea who this J is. Is it Junichi himself or is it someone with a scarier name like Jaws or Jack the Knife? It was lyricist Akimoto and composer Yasuhiro Kido（木戸やすひろ）on this one.

At 1:04:40, there is "Traces" which ends Disc 1 on "TRANSIT". It is not only the B-side to Inagaki's April 1987 11th single "Omoide no Beach Club"（思い出のビーチクラブ...Beach Club of My Memories）, but it's a cover of the original 1968 ballad by the American band Classics IV that ended up becoming its biggest hit.

Hopefully I'll get Disc 2 up and running some time in August.