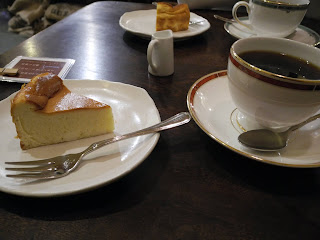 In our neck of the woods, the vaccination rollout has been continuing apace, and as such, the authorities have deemed the results satisfying enough so that restaurants and theatres can re-open almost a week ahead of schedule...namely Friday. Good to hear and I'm hoping that things will continue to improve steadily as the summer goes on. I'm just a little worried about the coming fall.

Back in 2012, I wrote about a kayo that got its fair share of covers over the decades called "Coffee Rumba" which was itself a cover of the instrumental "Cafe Moliendo" performed by Hugo Blanco in 1958. Sachiko Nishida（西田佐知子）was apparently the first Japanese singer to tackle "Coffee Rumba" but since then, many other singers have covered it including 80s aidoru Yoko Oginome（荻野目洋子）through a more high-octane take (or high-caffeine).

Another cover that I hadn't known about was by the late gospel singer Yuka Kamebuchi（亀淵友香）. Earlier in her career, she was also trying out a number of other genres such as New Music of the 1970s with one example being her 1974 "Zig Zag ~ Yoidore Tenshi no Polka"（ジグザグ～酔いどれ天使のポルカ）. In 1983, Kamebuchi released the album "Classics" which has her take on "Coffee Rumba". Compared to the silky "Cafe Moliendo" and Oginome's synth-pop version, Kamebuchi's version has more of a slow-cooking 80s funky and slightly haunting neo-film noir arrangement, maybe even with a bit of reggae. Certainly, there is some more RUM in this rumba.

Email ThisBlogThis!Share to TwitterShare to FacebookShare to Pinterest
Labels: 1983, Follow-Up, J-R and B, Single, Yuka Kamebuchi