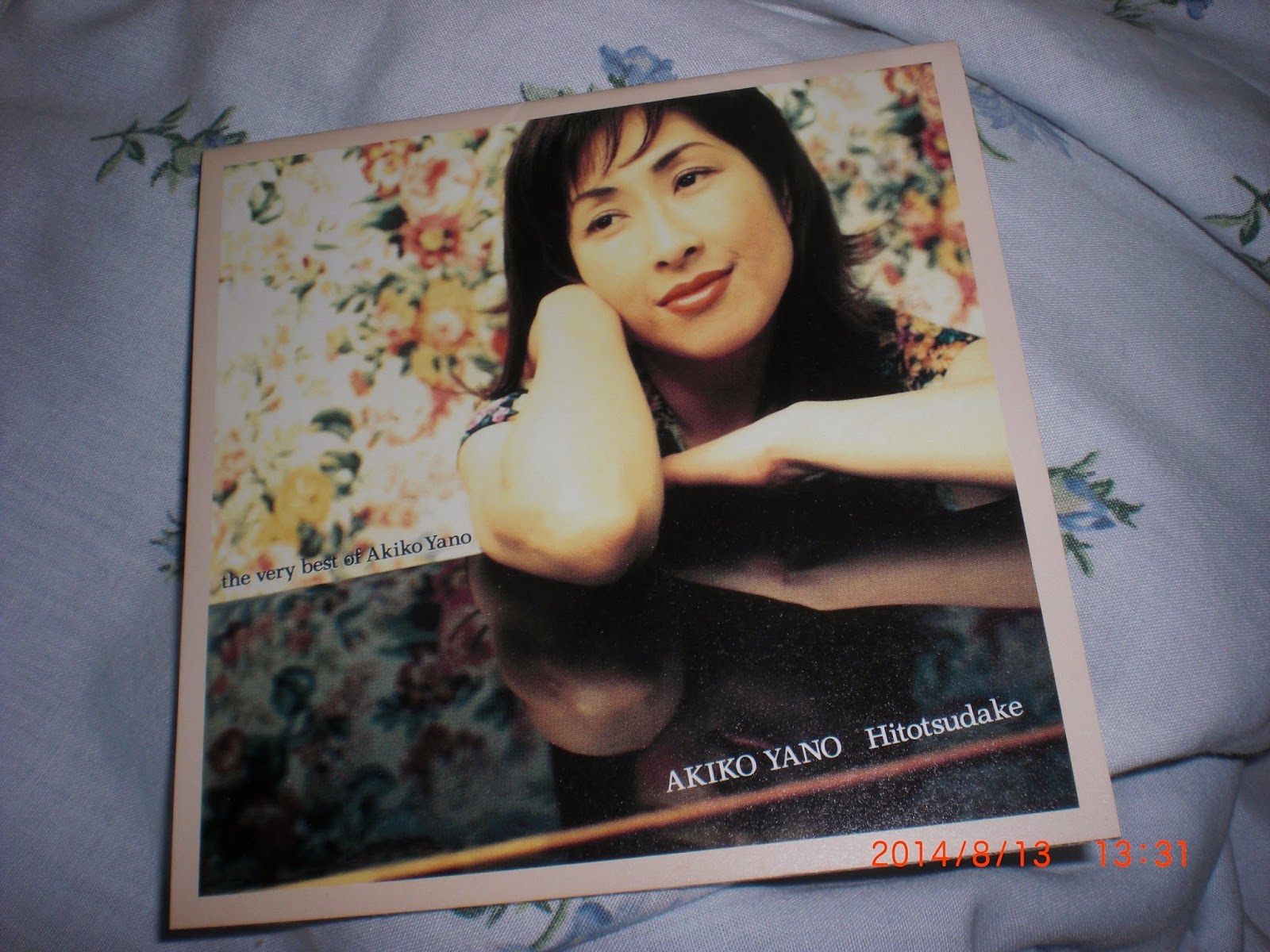 Not sure when I entered the fan world of Akiko Yano（矢野顕子）. When it comes to this songstress, it's almost like living out the description given by Leonard DiCaprio's character of Dom in "Inception" (one of my favourite movies ever) when it comes to dreams: one doesn't remember the beginning of a dream; you're just suddenly there. And so it was with me. I didn't know much about Akiko Yano except for seeing her albums on the shelves and then one day....BOOM...I was listening to her music. Keeping on the theme of dreams, whenever I listen to her oeuvre, I could find myself running in a day-glo landscape of hopping anime characters or strolling in a quiet narrow residential lane somewhere in the shitamachi district of Tokyo.

And so, I introduce another BEST album: Akiko Yano's "Hitotsudake: The Very Best of Akiko Yano" from September 1996. Now, a lot of the tracks from this album are already on the blog; to be specific, everything but the last three entries and "Tong Poo" (the last two are from her 1997 "Oui Oui" album), so feel free to just select "Akiko Yano" to the right. As for the playlist:

Unless indicated, the songs have been written and composed by Yano.


Although I have already given it its own article, I really felt that I should start with "Harusaki Kobeni" since it was perhaps that door which opened Yano World to me. At the time, I hadn't known about her marriage to Yellow Magic Orchestra member Ryuichi Sakamoto（坂本龍一） and the fact that she was an active member of the technopop trio during their concert tours was also something to be found out much later. But when I did eventually glean more about her career, I went "ahhh...naruhodo" when it came to "Harusaki Kobeni", her 5th single from 1981. Yano created the music but Shigesato Itoi （糸井重里）came up with the lyrics.

This song is so quirky and fun to listen to, and it's the one that brought about my day-glo anime landscape analogy up in the first paragraph. It was also a part of her 5th album, "Tadaima" （ただいま...I'm Home）from 1981, a continuation from the previous album of "Gohan ga Dekita yo"（ごはんができたよ...Dinner's Ready）which started showcasing a new Yano of technopoppy tripping.


Some of the tracks on "Hitotsudake" are re-arranged versions of the original songs. The first example is the title track itself. nikala had mentioned about the song "Hitotsudake" (Just One) as being one of her favourite 80s tunes, and it was a track on the aforementioned "Gohan ga Dekita yo". The version on the BEST album that I became accustomed to is a more acoustic one with Yano's piano, and so when I heard the 1980 original with the spacey synth, I have to admit that I like the earlier version better. And it's this rendition that cemented the impression I've read about Yano's style resembling that of Kate Bush.

But then there were her early years when she debuted in 1976. "Kikyu ni Notte" (Getting on a Balloon) isn't a dramatically different beginning for Yano for those who have known her since the 80s. I mean, she shows some of those trippy vocal gymnastics but her voice then was a bit more grounded here and the music took me back to some of the pop/soul/funk (in Japan, this would've been classed as New Music or City Pop) that I used to hear on AM radio from chanteuses like the late Nicolette Larson. The above YouTube video version is in "Hitotsudake" the album, and it had been an unreleased version from 1974 with Tin Pan Alley members Haruomi Hosono, Tatsuo Hayashi and Shigeru Suzuki （細野晴臣・林立夫・鈴木茂）backing her up along with Ginji Ito（伊藤銀次）. The one that longtime fans of Yano have known is the longer version below which featured the US rock band Little Feat and has the singer vocally riffing about in a much more sultry way as if she had something to prove. That version was on her first album, "Japanese Girl" in 1976.

Listening to "Kikyu ni Notte", I got the impression of Yano enticing folks to get on that balloon with her, cut all ties and fly off over lands more exotic and interesting. Knowing how Japan was gradually getting more affluent at the time (not sure if the Nixon Shock had totally worn off by then), I'm sure there were quite a few listeners who were more than happy to follow her.

"Denwa Sen" (Telephone Line) was another track from "Japanese Girl" that seemed to hint at the wonders of distance as Yano sang about reaching that special someone through the titular telephone lines. And once again, her vocals and the melody help us go along for the ride of electrons buzzing through kilometres of wire, earth and sky. I'm not sure whether NTT had ever considered using "Denwasen" as a campaign song, but perhaps it wasn't quite kayo enough.

Since I've already covered pretty much all of the early 80s technopoppy fare from "Hitotsudake", let's jump over to 1989's "Welcome Back", an appropriately titled album since Yano was coming from a year's leave of raising her child. To be honest, I have yet to explore more of her jazz side but "Watching You" is a nice place to start from. And quite the pedigree in musicians helping out on the album with Pat Metheny, Peter Erskine and Anthony Jackson. As with "Harusaki Kobeni" almost a decade earlier, Shigesato Itoi provided the lyrics.

"Yume no Hiyoko" (Dreaming Chick), one more Yano/Itoi collaboration, is her 17th single from July 1994, and it was a song that I heard and saw fairly regularly since it was often featured on Fuji-TV's morning children's program, "Ponkickies"（ポンキッキーズ）. I think Yano's high-voiced delivery was perfect for a song about a cute little chick/kid, and the original video from "Ponkickies" is below although the sound isn't too good. "Yume no Hiyoko" originally found a place on her 1994 album, "Elephant Hotel".

"Hitotsudake" reached No. 7 on the album charts. Officially speaking, she's two years shy of celebrating her 40th anniversary in her still-active career, although there is that earlier version of "Kikyu ni Notte" from 1974. As has been the case with her contemporaries Yumi Matsutoya and Taeko Ohnuki（松任谷由実・大貫妙子）, Yano has spanned the 70s up to the present day and stretched into a number of musical styles, and the 1996 BEST album by view of its release date only covers half of her time. I still have more to explore, and as I have mentioned in at least one article or so, some of my favourites-to-be are simply not included on BEST compilations. Quite the dreamscape to go over.