This was a touchstone song for me. I'd just started my 2-year life in Gunma Prefecture as a JET teacher, and I was watching "Music Station"（ミュージック・ステーション）, the long-running Friday night TV Asahi music show hosted by Tamori（タモリ）. "Music Station"came into its own as music ranking shows such "The Top 10"and "The Best 10"faded away. As with the latter two shows, "M Sute-"（M・ステー）had on the popular aidoru and bands of the day.

Then on that one Friday, Tamori introduced a band with an interesting name, "Dreams Come True". And I saw a couple of fellows bracketing this young lady with a cute bob and a million-watt smile. And she did what I'd never seen any singer or band do before on a Japanese music show: she screamed "HELLO! WE ARE DREAMS COME TRUE!!"in pretty darn good English. Then, they launched into this happy-go-lucky tune of a young girl sneaking home in the wee hours of the morning from her beau's apartment while trying to think up of an excuse for Mom (presumably, Dad had already gone to his 18-hour shift at the company). Since lead singer, Miwa Yoshida（吉田美和）, wrote the song, I've always wondered if it had been autobiographical.

「うれしはずかし朝帰り」(The Happy If Embarrassing Trip Home in the Morning) just sounded different. I'd heard that the band had spent some time in the UK, and the song definitely had that European feel to it...there were some surface resemblances between DCT and Swingout Sister. In any case, in retrospect, I always remember that moment in Music Station history as one in which kayo kyoku started giving way to J-Pop.

The single itself was released in September 1989, and it came on the album, "Love Goes On" which was released a couple of months later. Although the single managed to crack the Oricon 100, it was the album that made some big inroads, getting as high as No. 8 on the album weekly charts before finishing up at No. 34 on the 1992(!) Oricon Albums of the Year. But as any Dorikamu fan knows, it would be higher and higher for the band for the next several years.

Thanks again to J-Wikipedia for the data. 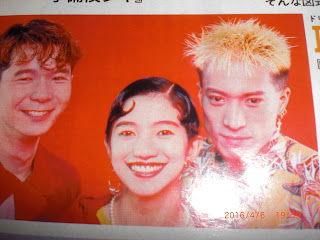