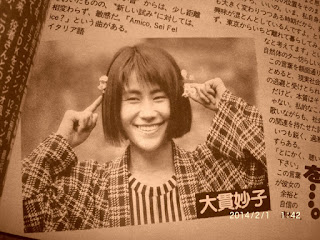 Taeko Ohnuki's（大貫妙子） third solo album, "Mignonne", was also her first for the RVC/RCA label and her first of the "French"titles. I guess the PR department at her new label was just having a field day promoting the next album of this talented young lady...only to have it flop! No immediate hits came from it. If there had been a headline in "Variety", it probably would have screamed "MIGNONNE FILLETED!"

I bought the remastered version of "Mignonne"and listened to it. I also read the Japanese liner notes in which a somewhat cheerfully rueful Ohnuki gave her thoughts about the production. She was pretty straight about it...it was a nightmare! It was produced by E-ji Ogura（小倉エージ）, a music critic who had been critical of Ohnuki in the past....kinda imagine having Charlie Brown being coached by Lucy Van Pelt. She hinted at some battles in the studio between her and Ogura, although it sounded more like an employee being chewed out by the boss in the office. When all was said and done, she had even considered hanging up her mike for good. And a long gap in time would pass until she got on that horse again. In the interim, she did other things such as singing backup for other singers.

After my first listen to it, yep, I had to admit that it didn't hit me all that much. There was a feeling in her delivery that she hadn't felt too comfortable with what she had been given. But I think it was more of a "It's A Wonderful Life"phenomenon. Like the Jimmy Stewart movie, it had been an initial flop but it has grown more and more significant over the decades. It just needed more time to reach us. And that is my feeling on it.

And indeed a couple of hits have come from it. The above video is for the second track "Yokogao"（横顔）"Profile", a breezy, jazzy tune which has become another standard for future J-Pop singers, and a perennial song to be sung at Ohnuki concerts.

The other is "Umi to Shonen"（海と少年）"The Ocean and the Boys", a somewhat more New Music-esque song which feels like a link to her previous album, "Sunshower". The other tracks have her go into a bit of funk, blues and even disco. Varying results but still a good album that I'm glad I got.
Posted by J-Canuck at 11:20 PM