Lovely song, sorry about the title. Chika Ueda (上田千華), singer-songwriter, came up with this along with lyricist Masami Tozawa（戸沢暢美）. Not sure if it had been a late night for them, but I could imagine the situation with the two partners:

Of course, that is all conjecture. I tried looking up an interview with either Ueda or Imai about how this title was formed but no luck so far.


In any case, Miki Imai (今井美樹)...yeah...in the late 80s, with kayo kyoku about to diversify into J-Pop's many paths, there was a small trend of female singers with mellow AOR-friendly voices taking on some medium-tempo ballads and happier tunes. In 1989, the model-turned-singer Imai released her 4th album in 1989, "Mocha--Under A Full Moon", and this was the 3rd track. Listening to this slow jazzy song kinda makes one wanna brew up that mocha and curl up in an armchair on a rainy, lazy Sunday. The album itself got about as high as No. 5 on the Oricon charts. 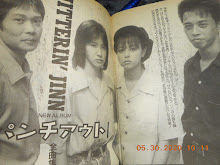