One of the wonderful things about my hobby is that I've been listening to kayo kyoku for all these decades...and yet I still get surprised at what I discover. Case in point: this album that Momoe Yamaguchi (山口百恵）released back in July 1979, a little more than a year before she retired from the business for good. I came across this in my book on "Japanese City Pop" but didn't think there would be any singles from it on YouTube. And it's indeed hard to find the tracks for "Momoe Yamaguchi LA Blue" , but I did manage to find some examples of covers and otherwise.

Just by looking at the cover of "L.A. Blue", it was obvious that Momoe's 18th album would be quite different. From the electric blue neon signage to the image of a Los Angeles dusk, this looked more like something from an American AOR singer's collection. The songs were all written by Japanese artists but recorded in Rosu and arranged by Barry Fasman. The above video is a karaoke cover for the first track, "GET FREE", which was created by the prolific songwriters Takao and Etsuko Kisugi （来生たかお・えつこ）. The song has that drive-across-America feeling much along the lines of Canadian singer Patsy Gallant's "From New York to LA".

Around the late 70s and early 80s, there was a North American pollination of sorts with Japanese artists recording and seeking help from session artists such as TOTO's Jeff Porcaro and Steve Lukather. And even David Foster has been in a couple of duets with a couple of the big names in aidoru-dom (no, he didn't skip around or dance frenetically).


"Dancin' In The Rain" is the final track on "LA Blue". I can't quite describe it exactly but it seems to come across as a mix of a typical Momoe ballad and a love song from California. Shogo Hamada（浜田省吾） was responsible for the contemplative melody and Kei Yokosuka（横須賀恵） wrote the lyrics. Just to let you know, Kei Yokosuka is just the pen name for Momoe herself.

Here is another ballad from the album, "Cry For Me" which was again written by Kei Yokosuka and composed by Jun Hatano（波多野純）. The YouTube video is a bit rough but it's interesting to see Yamaguchi perform it on "Music Fair".


And this is "Neko ga Miteiru"（猫が見ている...The Cat Is Watching）, a light disco-funk piece which was written by novelist Teruhiko Kuze (久世光彦...under his pen name of Natsu Otani) and composed by guitarist-singer Fujimaru "Fujimal" Yoshino（芳野藤丸）. In a way, it sounds like it should belong as part of a score for one of those 70s cops-and-robbers shows.

I'm not sure how rare "LA Blue" is nowadays, but if it is of a reasonable price, I wouldn't mind acquiring it myself. As for its success on the charts, it went as high as No. 2.

If you are curious about the album, it is actually on Amazon.jp. 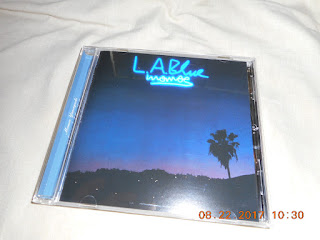