One of the attractions for kayo kyoku is that the music had been very enthusiastic about adopting international genres, especially jazz and bossa nova. A lot of foreign artists have often been more beloved in Japan than even in their home countries. The vocal group, The Manhattan Transfer, has been a favorite for decades. I even had the privilege of seeing them live a couple of years ago in Tokyo's Blue Note in Aoyama.

Japan has its own vocal groups. Currently, the most famous one seems to be the acapella group, The Gospellers. I've already mentioned another one that began in the 1970s, Hi-Fi Set. And there is Circus which debuted in 1977. The quartet is a family affair consisting of three siblings (the Kanos...叶) and an in-law, Junko Hara (原順子）.

Their second single was the one that got them onto the charts. "Mr. Summertime" was released in March 1978 and got them to the very top of the Oricon weeklies to become the group's biggest hit. However, this song was actually a cover version of Michel Fugain's "Une Belle Histoire" in 1972 which is shown below. Circus' cover is given the French Riviera resort-and-cocktail jazz spin which has reminded me of classic Manhattan Transfer. 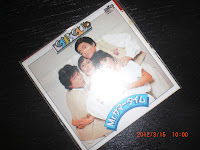