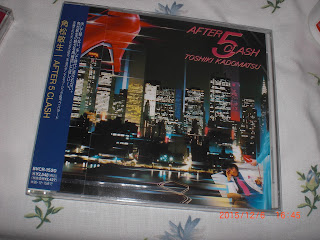 Yep, after listening to and writing the article about "After 5 Crash", I just had to get Toshiki Kadomatsu's（角松敏生）4th album, "After 5 Clash" from April 1984. I mean, just on the cover alone with that red pump and the inviting nightscape, I would have been sorely tempted (I didn't even see Kadomatsu in the lower-right corner there) to get it, but "After 5 Crash" was the tipping point for me.

Just going through the album today (all of the tracks were written and composed by Kadomatsu), I had this impression. Some months ago in another article, I mentioned that Quincy Jones' classic "The Dude" was the Michael Jackson album that Michael Jackson didn't do. Well, after listening to "After 5 Crash", I could say something similar. To a certain extent, it sounds like the Anri (and even the TUBE) album that Anri didn't do. It's chock filled with all of the 80s summer goodness, happy horns and thumpy bass that I would have expected from Anri, TUBE and Kadomatsu.

Track 1 is "If You", which even has hints of late 70s disco with the flute in there, gets the party started, complete with mirror ball. Listening to this, I got images of pre-Bubble Era dancing down in Roppongi and bombing down a Tokyo highway. Yurie Kokubu（国分友里恵）helps out on backup chorus here as she does in a number of the tracks.

Tracks 2 and 3 are "Midnight Girl" and "Airport Lady" respectively. "Midnight Girl" is a slightly more laid back but still happy tune about a fellow sighting a lovely and somewhat tipsy lady in one of the back streets after both have had their respective fun for the evening. Meanwhile "Airport Lady" is apparently dedicated to "All of Stewardess" (sic) according to the liner notes as perhaps the same fellow is now falling for a blonde flight attendant as she passes by somewhere in the airport. Considering the glam and the heart-palpitating melody in this one, you would think that she was working on that same plane which always symbolized the genre of City Pop.

Someone get the license of that bass? Thanks, Tomohito Aoki. Yes, that would be "Never Touch Again" which most likely hints at that one-night stand in the Big City. Couldn't imagine any romance like this happening in a seaside village.


My final paragraph is for "Will You Wait For Me?" which sounds so perfect for Anri（杏里）that I'm wondering if the song did manage to make it onto an album of hers or whether she actually performed it at a concert. Still, Kadomatsu acquits himself just fine here. After all that uptempo running around in the city, it's nice to have a ballad in there, although even this ballad has got a pretty epic approach with the guitar solo and such. Thank you Musiqueman's Back.

"After 5 Clash" peaked at No. 54 on Oricon. So, perhaps not a Top 10 album but for a fellow like myself who has enjoyed the funky and urban sounds of Kadomatsu all these years on his own or for singers like Anri, this album will do just fine for a night. 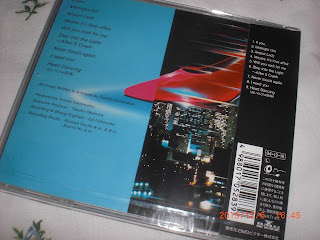