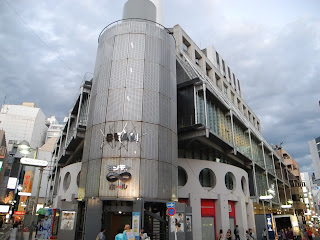 I keep forgetting that these guys actually sing and dance. Arashi（嵐）has not only become the premier Johnny's Entertainment group but it's become quite the force on the variety scene as well and perhaps in the TV drama circuit. I keep seeing Ono-kun and the rest of the guys having fun times on their "VS. Arashi" game show every Friday so it was a bit jarring when I saw them last night cut away for a few minutes to see them perform their latest single at the time (I think the episode was from September 2016).


Not being a huge fan of Arashi's musical output, I have remembered various excerpts of their past hits including their 20th single from September 2007 "Happiness". Those words of "hashiri dase, hashiri dase" still pop up in my head now and then.

Starting off with a battery of guitars that sound like they belong in a Quentin Tarentino movie, "Happiness", true to its title, goes off in a happy-go-lucky direction that starts to remind me of Princess Princess' "Diamonds". So, perhaps it's not the most completely original of compositions but it's hard not to like especially when the group goes into the refrain as noted above. Wonderland was responsible for the lyrics with Mio Okada（岡田実音）taking care of the music.


It's a very uptempo song so I wasn't all that surprised when I found out that it was the theme song for a 2007 TBS drama "Yamada Taro Monogatari"（山田太郎ものがたり...The Tale of Taro Yamada）based on a manga and starring two of Arashi, Kazuya Ninomiya and Sho Sakurai（二宮和也・櫻井翔）. Can hardly believe it's almost been 10 years since this came out but then considering how young all of the guys look, I can also hardly believe that they debuted in the 20th century.