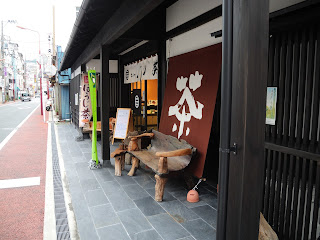 Premium Friday! Looks like the Japanese government has launched another new business concept alongside the old Cool Biz to alleviate the stresses of the corporate cog workers. I only heard about Premium Friday this morning on NHK's "Newswatch 9" when several companies were encouraged to let their employees finish work at the ungodly hour of 3 pm on the last Friday of every month so that they can either relax or, better yet, go shopping since consumption hasn't exactly been robust as of late.

The results for this very first Premium Friday? Decidedly meh...it was really only a handful of companies that decided to get with the program in this workaholic nation. Apparently, most of the unleashed employees decided to go home to sleep. During the NHK feature, one small nomiya in the business district in Osaka that decided to open early in the afternoon to receive any potential customers among the Premium Friday folks got just one customer up to 5 pm. Mind you, it might be kinda weird to many folks to suddenly chug-a-lug a chuu nama and down some yakitori at the same time that others are sipping tea. Hey, it's a work in progress and I think it's a pretty good idea in the long term, although I also think that Premium Friday should also take into consideration the fate of the part-time workers who just get paid by the hour.


Anyways I gave all that preamble at the top to let folks know that it is a Friday so as is the case here as well as in Japan, TGIF is very much in force. So I'm sure folks in Japan were hitting the bars and izakayas as usual. Of course, for older generations that could probably mean some good ol' drinking and perhaps even some shibui karaoke at the boxes.

A few nights ago on the weekly "Uta Kon" (うたコン), the theme was drinking songs (although there was a somewhat disappointingly brief tribute to the works of Toru Funamura at the beginning), and I heard this tune by enka singer Midori Oka（丘みどり）titled "Sado no Yubue" (The Night Whistle of Sado). It was quite pleasing to the ear since there was something in there that brought back the old days of enka. From what little I know of Sado Island off of Niigata Prefecture, it's the home of those internationally famous kodo drummers.


"Sado no Yubue" was written by Toshiya Niitani（仁井谷俊也）and composed by Tetsuya Gen（弦哲也）as Oka's 8th single released just a few weeks ago on February 8th. It is another case of bittersweet parted love as the singer relates the story of a woman pining for his love as he leaves the island while hoping beyond hope that she will hear the sound of that whistle signaling the return of that ship.

Oka has been a pretty regular guest on "Uta Kon" and its predecessor "Kayo Concert"（歌謡コンサート）and I see her as one of the next shining generation of enka singers. She's got quite the powerful voice, too. And perhaps all of her success can ultimately be due to her mother since according to J-Wiki, Oka had been a painfully shy girl when she was a child so to draw her out of her shell, her mother entered herself and her daughter into minyo lessons. Later on, at her very first minyo contest when she was in Grade 5 of elementary school, Oka won the championship! A star was indeed born.


A couple of mugs of beer will probably help anyone come out of their shell...or put them to sleep, as in my case.
Posted by J-Canuck at 2:08 PM