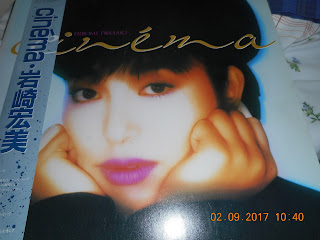 Aside from a 45" single and a couple of audiotapes from my brother and mother respectively, my early Hiromi Iwasaki（岩崎宏美）purchases came at that Chinatown record shop Wah Yueh. And the lady certainly didn't disappoint in terms of her cover photos. For instance, one time I was in there, I was surprised to see this Iwasaki album literally staring at me with come-hither bedroom eyes.

And that is the photo you see above...the one for the album "Cinema" which was the singer's 16th album from November 1985. I have to say that the cover of the dolled-up Iwasaki photographed through a slightly fuzzy lens was perfect for the album since she did look like a star from the Golden Age of Hollywood. Well, it didn't take long before I bought the album since I couldn't take Hiromi-chan staring me the guilt trip.


When I listened to "Cinema" the first few times, I came to the realization that what became her hits on television were quite different to her album material. As I first got to know her in the 1980s, I had become accustomed to that certain style she had with ballads. So it was with this album that I found out that she took on a number of genres through the various tracks.

To be honest, I didn't expect to ever come across any of the album's songs on YouTube since the only single that came out of it was "Gekkou"（月光）, and I had already covered that in a past article. So I was surprised to find this particular track from "Cinema" right at the beginning of this fine compilation of City Pop tunes in the above video. The video doesn't have any titles, singers or track times listed so for those viewers who have already encountered it, Track 1 is Hiromi Iwasaki's "Hoshi ni Negai wo" (Wish Upon A Star).

This was also the starting track on "Cinema" and initially I wasn't a fan of the song since it sounded so different from what I was accustomed when it came to the songs that I had known her for. "Hoshi ni Negai wo" was actually funky and had a rather speedy tempo although it also had those familiar strings behind Iwasaki, and of course, that lovely lilting voice.

However, knowing what I do now, I've come to appreciate it more. It straddles the line between City Pop and regular pop in sound and words with Goro Matsui（松井五郎）taking care of the former and Etsuko Yamakawa（山川恵津子）taking care of the latter. Matsui created a story of a lady hardly believing the whirlwind romance she's been experiencing with her Prince Charming and hoping that no pumpkins pop up at midnight. If the singer is living vicariously through the heroine, then she is just as joyful as she is anxious about the whole affair. Just the way that she repeats "Naturally....", she is definitely enjoying the ride.

The overall theme of "Cinema" is about the fantasy life on the movie screen, and "Hoshi ni Negai wo" starts things off appropriately with that sweeping feeling into an exciting urban Wonderland. Frankly, I'm not sure how long the above video will be up there but if you catch this article early enough, enjoy that first track and perhaps you can let me know who sings the next song since I've fallen in love with it, too.

As for "Cinema" itself, the album peaked at No. 40 on Oricon.