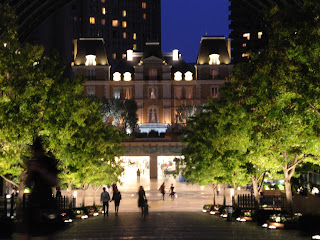 Some weeks ago, I came across this YouTube video showing a recorded version of the late Masahiro Kuwana's（桑名正博）debut single "Aishuu Tonight" (Sorrow Tonight). I liked the song enough that I figured I would write an article about it sometime only to find out that the video had been taken down.


Fortunately, there were other uploaders who were also quite appreciative of the disco-rock number by Kuwana so I was able to get this performance of him on what I think is Fuji-TV's "Yoru no Hit Studio"（夜のヒットスタジオ）. Released in June 1977, this was another collaboration between lyricist Takashi Matsumoto（松本隆）and composer Kyohei Tsutsumi（筒美京平）which probably had Kuwana channeling his inner Rod Stewart. It's quite the raucous love song and he may have sent a number of hearts a-flutter on that TV performance. And considering the melody was by the same man, the disco beat has some similarity with a Hiromi Iwasaki（岩崎宏美）hit that would come out the following year "Cinderella Honeymoon" (シンデレラ・ハネムーン). I gather that Tsutsumi really liked that mirror ball back in the day.


Some years later, Hideki Saijo（西城秀樹）would do his own version of "Aishuu Tonight" in his cover album "HIDEKI SONG BOOK" from March 1981. Listening to his amped-up version with the horns and all, I thought that Saijo was the ideal man to cover Kuwana's song. His energy and vocals matched those of the original singer quite well.
Posted by J-Canuck at 1:05 AM