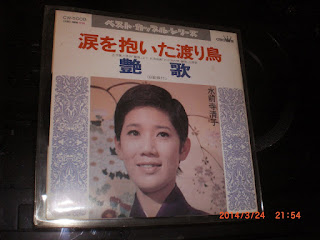 As I've mentioned before, anyone who knows veteran singer Kiyoko "Cheetah" Suizenji（水前寺清子）but isn't a huge fan of hers will know that one trademark song she first sang in the 1960s "Sanbyaku Rokujuu Go Ho no March"（三百六十五歩のマーチ）. With that crowd pleasing kayo and her short haircut, the singer became kayo kyoku's proud majorette.


What I didn't know was that almost a year after that hit was first released, Cheetah came up with another happy march. This time, it was "Shinjitsu Ichiro no March" (The Straight Road of Truth March) which came out as her 29th single in October 1969. Written and composed by the same duo for "Sanbyaku Rokujuu Go Ho no March", Masao Yoneyama（米山正夫）and Tetsuro Hoshino（星野哲郎）, Suizenji was no longer just exhorting the working class; it was now everyone. As Hoshino's lyrics put it, it's not so much about the length of that road of life but how you walk upon it.

And according to Suizenji, that road should be trodden on proudly and assertively with no regrets. Plus, having a tambourine to tap wouldn't hurt. I thought she would have made a fine pastor by this point.

I couldn't find out how "Shinjitsu Ichiro no March" did on the charts but it did win Suizenji a Japan Record Award and her 5th appearance on the Kohaku Utagassen in 1969. Ironically, she wouldn't actually sing her more famous march on the annual NHK special event for the first time until 1980.
Posted by J-Canuck at 3:02 PM