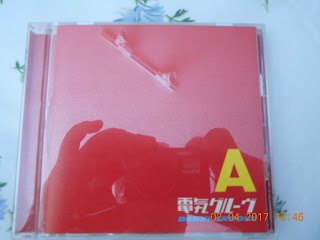 Nice to welcome back Denki Groove（電気グルーヴ）!

When I was writing about their biggest album "Ace (A)" from May 1997, I hadn't realized how much hell the band had been going through at the time. Since the release of their previous 1996 album "Orange", Denki Groove had to deal with the collapse of the agency representing them, the disappearance of their manager (!). and various troubles with their recording company. Of course, the frustration levels grew to the point that the group made a declaration when it came to their next album: "We're gonna take revenge against this world that's beaten us down!". I guess there was something rather Howard Beale about that.

Sure enough, all of that angry energy paid off in a good hunk of dividends. Their biggest single in their career came from the album, "Shangri-La", and the album itself was their most successful release, hitting No. 3 on the charts. Plus, I remember very well the musical explosion that was "Volcanic Drumbeats"; Takkyu Ishino（石野卓球）, Pierre Taki（ピエール瀧）and Yoshinori Sunahara（砂原良徳）must have gotten a lot out of their collective system with that one.


Another "stress reliever" probably came in the form of Track 8 "Asunaro Sunshine". Not only was this an over-9-minute dance track, but this sounded like a semi-religious experience. According to the J-Wiki article on "A", Taki took vocal training specifically for this epic as he slowly exhorted "ASUNAROOOOOOO........SUUUUUUUUNSHINEEEEEEEEEE!!!" It's the one thing I've always remembered about the song all these years.

Does anyone remember "Indiana Jones & The Temple of Doom" where that mad Thuggee priest screamed out "KALI MAAAAAAAAAAA"? Just imagine Taki in place of Mola Ram exhorting his disciples in the Temple of Rave under the bright lights of Tokyo. Yup, it's half cult anthem, half dance tune. And Taki really throws himself into the performance...he basically strangles himself with his screaming halfway through "Asunaro Sunshine", although I'm not sure whether his tongue got in the way while it was heading to his cheek. Plus, along with the rave and operatic aspects, Ishino even includes a bit of 70s funky bass in there, too.


I would probably think that after the recording of "Asunaro Sunshine", the guys needed a short vacation for that one track alone.

I've heard the word asunaro bandied about in Japanese pop culture. For example it was used as part of the title for an especially popular drama in the 1990s titled "Asunaro Hakusho"（あすなろ白書...Asunaro White Paper）. Apparently the word refers to a certain type of cypress tree. So "Asunaro Sunshine" means "Cypress Sunshine", but with the usual Denki Groove sense of humour and wordplay, the lyrics play around with the title so that the guys also yell out the title to also mean "Let's become tomorrow!" before Ishino tells everyone in the flock to "Let's become cypress trees tomorrow!"

Cypress may have a wonderful scent but there are also plenty of folks in Japan who are very allergic to its pollen. Just thought I should let you know.