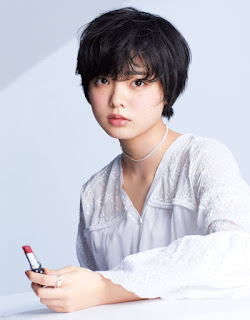 This is a topic I already talked a bit about in my introduction post. I had ventured through the world of vintage idols for maybe a year and half when I decided it was time for a break - from vintage, not from the idols. So I decided to follow one of the only recent idol groups I knew, which was AKB48.

After some time browsing their members and songs, I stumbled upon this, at the time, recent group called Keyakizaka46 (欅坂46), the sister group of Nogizaka46, which in turn is the "official rival" of AKB48 (another way to say that the profit ends all in the same pockets). They were about to release their third single when I started hearing about them, and had a seemingly permanent center member called Yurina Hirate (平手友梨奈) (affectionately called "Techi", shortened from "Hiratechi").

With only 14 years old, she passed the audition singing "Hoshizora no Distance" (link to J-Canuck's article), a quite mature song for her age. And that was probably part of what Yasushi Akimoto ended up basing the image of Keyakizaka46 on: a tale of resistance of youth towards the shackles of society. And Hirate ended up embodying that image on stage and in her soul, as she herself says in interviews.

"Yamanotesen" (山手線) is Hirate's first solo song, included in the 2016 debut single of Keyakizaka46, "Silent Majority". The title song was a big hit by itself and the whole single is a pretty solid one, so I plan on writing another article about it.

The lyrics were written by Yasushi Akimoto, as usual with all groups under his wing. The theme coincides with the aforementioned image choosen for Keyakizaka46. There's a girl who doesn't know which "train stop" to choose in order to reach happiness and love in the future, so she keeps going around in circles. As does the railway line that circles the Tokyo metropolitan area, Yamanote Line.

And this is the thing I wanted to mention. The song sounds like it could have been taken straight out of Momoe Yamaguchi's early repertory (pre-"Yokosuka Story"). And look at the picture I started the post with: she resembles Momoe-chan, doesn't she? Not only physically, but also in the tone of the songs she sings, both solo and with Keyakizaka. Just when I "was supposed" to take a break from the older idols, lol. And it's not just me to notice this: it was already mentioned in media several times.

I'm not as passionate with Keyakizaka46 as I was when I met them, but I still keep an eye on them. The picture I posted is from a magazine released this week. I just can't keep myself from feeling happy when I see Hirate looking like one of my favorite singers of all time. By the way, this girl is also a fascinating person by herself, and I wonder where the future will take her.

To finish this post (I swear it's the final line about my hyping with Techi and Momoe-chan, lol) here's Keyakizaka46 singing Momoe's "Hito Natsu no Keiken", in the 2016 edition of FNS Uta no Natsu Matsuri. The group's singing is far from good, but it's worth it for that initial solo line.